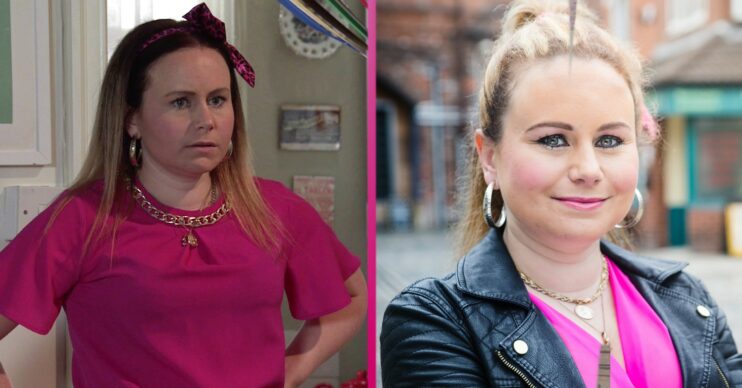 Gemma Winter in Coronation Street: How many kids does she have?

She's been through a lot of drama - and a bit of a character transformation - in her time on the cobbles.

Gemma Winter in Coronation Street is the quirky, feisty mum of quads. She’s the girlfriend of Chesney Brown and stepmum to his son, Joseph. And she’s the daughter of Bernie Winter and twin sister of Paul Foreman.

In her time on the cobbles Gemma’s gone from being a dodgy mate of Kylie Platt’s, to the fiercely loyal family defender she is now.

Gemma is played by actress Dolly-Rose Campbell. She joined the show back in 2014. Before landing the role of Gemma, Dolly-Rose had a short stint in Doctors, but it was Corrie that really made her name.

In 2017 Dolly-Rose scooped Best Comedy Performance in the British Soap Awards, and won Funniest Female at the Inside Soap Awards.

And in 2019, Dolly-Rose spoke out about how much she loved Manchester Pride. She told the Daily Star that she’d been going to the event for more than a decade and it had helped her accept her bisexuality and be proud of who she is.

Gemma – whose full name is Gemini – came to the cobbles as a friend of Kylie Platt. Gemma and Kylie had grown up together, along with Kylie’s ex Callum Logan.

The pair rekindled their friendship when Kylie went back to the estate where she used to live, then again when Gemma was caught shoplifting and gave the security guard Kylie’s name instead of her own.

At first, Gemma was a real troublemaker. She even helped Callum get rid of a gun, and blackmailed Bethany Platt into giving nasty Mr Logan an alibi.

After Kylie killed Callum – who was attacking his girlfriend Sarah Platt at the time – she sent Gemma a text message from Callum’s phone saying he was going away for a while, and Gemma left Weatherfield.

When Gemma returned to Coronation Street a few months later, she was determined to turn her life around.

She got a job at the kebab shop and even stepped in when it looked like an old mate from the estate was going to scam Norris Cole.

When teen thug Clayton Hibbs attacked Gemma, Kylie stepped in to save her friend. But Clayton stabbed poor Kylie and she died.

After Kylie’s death, Gemma moved in with Rita Tanner.

The pair struck up an odd friendship and are still devoted to each other.

After a lot of on-again, off-again, Gemma and Chesney finally got together.

And in 2019, gobby Gemma – who adores Chesney’s son Joseph – was delighted to discover she was pregnant.

But there was a shock in store for the cute couple when they found out their new arrival was actually quads!

In typical Gemma style, the mum-to-be decided she was going to make some money from expecting quads.

She became famous when she got stuck in the turnstile at Weatherfield County thanks to her enormous baby bump!

The quads were born in dramatic fashion on a romantic trip to Wales, when Gemma went into labour on a cable car.

The couple named their babies Bryn, Cleo, Carys and Aled and the family became the face of Freshco for a while.

Since then the family have been coping with the news that little Aled is deaf.

The tot has had a cochlear implant and the family have learned sign language to help him along.

And Gemma has persuaded Joseph to stay on the cobbles when he was tempted to up sticks and move to Portugal with his grandmother, Linda!