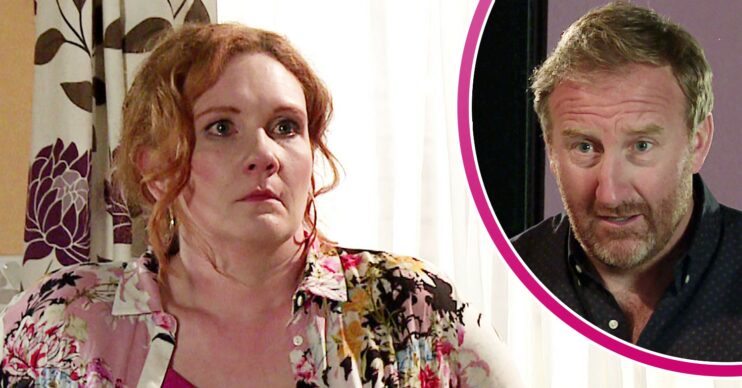 Coronation Street fans are furious with how Fiz has treated her husband Phill and are begging for her to tell him that she is back with Tyrone.

After Fiz dumped him at their wedding reception, Phill has been determined to win her back and pleaded for her to give him two weeks.

However fans are furious with Fiz for stringing Phill along and not telling him that she still loves her ex.

Read more: Coronation Street: Who will Fiz end up with as Phill desperately tries to win her back?

In last Friday’s scenes (June 8) it was Fiz and Phill’s wedding day.

Although they faced a few hiccups in the lead up to the big day, the wedding seemed to go to plan.

After the ceremony, Phill and Fiz went to the Bistro for their wedding reception.

But Fiz started to realise she made a mistake.

She asked Phill if she could speak to him privately and told him she didn’t love him.

Phill was devastated as he admitted he loved her.

Fiz ran out of the Bistro, meanwhile Phill announced to their family and friends that they split.

Across the street, Fiz went back to No.9 and told Tyrone that she still loved him and they shared a kiss.

Furious fans all saying the same thing about Fiz

In last night’s episode (Monday, July 11) Phill came over to No.9 to see Fiz and she asked him for an annulment.

He even questioned if Fiz still loved Tyrone and it seemed like she was going to tell him the truth.

But when Phill said he wouldn’t give Fiz an annulment if she was leaving him for Tyrone, she lied saying it had nothing to do with her ex.

Later Phill set up a romantic date at the Bistro.

He begged for Fiz to give him two weeks and if she still didn’t want to be with him by the end of it, he’d pay for an annulment himself.

Fiz told Tyrone about Phill’s idea and suggested they just go along with it for two weeks so Phill will give her an annulment, then after the annulment they don’t have to keep their relationship a secret anymore.

However fans were furious with ‘cruel’ Fiz for continuing to string Phill along and refusing to tell him the truth so she could easily get out of the marriage.

@itvcorrie #Corrie Really. This Fiz, Phill and Tyrone storyline is so rubbish. Not funny at all if that was the aim. Cruel to treat someone like that.

First it was 'just' the meal Fiz, now it's 'just' 2 weeks. For goodness sake put him out of his misery and end it!*! #Corrie