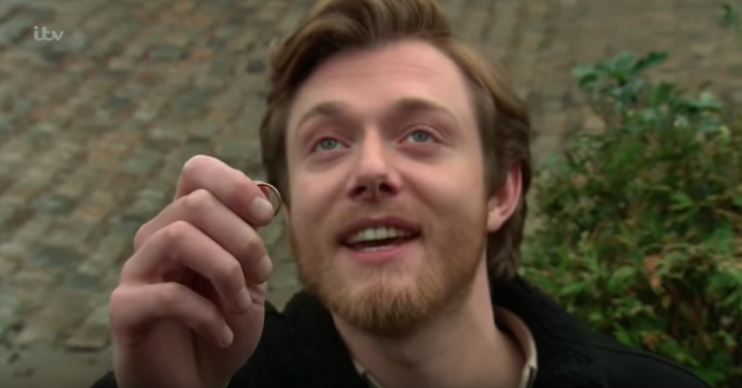 Viewers of Coronation Street were thrilled last night when the ITV soap recreated one of Friends’ most iconic scenes.

Although the moment happened in heartbreaking circumstances, fans couldn’t help rejoicing at the moment that Daniel Osbourne accidentally called girlfriend Bethany Platt the name of his late wife.

On Wednesday (March 4), Daniel was seen drunkenly proposing to Bethany.

Corrie is basically an episode of Friends. Yay.

But the confused and grieving dad dropped a clanger when he said: “Sinead, will you marry me?”

Understandably, poor Bethany looked crestfallen at the mistake, and the horrible error later prompted her to leave Weatherfield for a fresh start.

But fans couldn’t help leaping with glee at the moment, believing it mirrored a classic scene in the US sitcom Friends.

In The One with Ross’ Wedding – the fourth season finale of Friends – the plot revolved around Ross and the rest of the group flying to London for his wedding to Emily.

But in a now infamous moment, Ross called Emily the wrong name at the altar.

Although the marriage did go ahead, it didn’t last long.

Those watching Daniel’s botched proposal in Corrie couldn’t help remarking on the parallel between the scene and Ross’ faux pas in Friends.

One wrote: “I feel like I’ve seen this before…”

Another said: “Bethany and Daniel are an updated version [of Ross and Emily].”

A third added: “Oh no, he’s been Ross Gellered.”

“I thought the same thing. Friends is still the best show, I watch it everyday,” said one more, while another lamented: “Apart from Ross and Rachel got a happy ending.”

Even actress Lucy Fallon, who played Bethany, noticed the similarity tweeting: “When @Rob_Mallard said ‘Sinead’ all I could think of is when Ross says Rachel instead of Emily.

“Corrie is basically an episode of Friends. Yay.”

When @Rob_Mallard said ‘Sinead’ all I could think of is when Ross says Rachel instead of Emily. Corrie is basically an episode of friends x yay x

Even the official Corrie Twitter account joined the fun, posting: “The One Where Daniel Got Bethany’s Name Wrong… Could that BE anymore awkward!?”

The cast of Friends recently revealed they would be reuniting after 16 years away.

Are you excited for the Friends reunion? Leave us a comment on our Facebook page @EntertainmentDailyFix and let us know what you think!