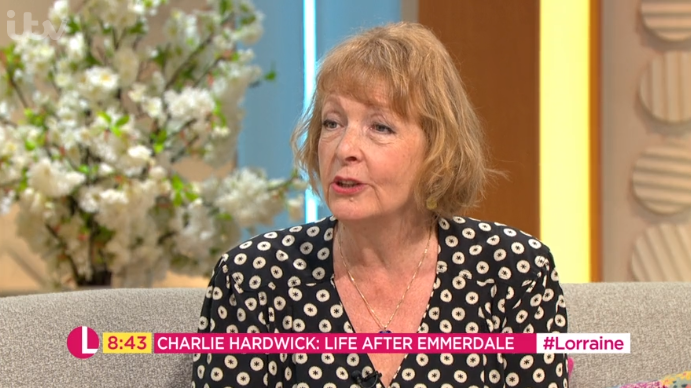 Also said she was "defensive"

Charlie Hardwick became “very defensive” and “sulky” when she discovered her Emmerdale character was being killed off.

The 58-year-old star portrayed Val Pollard on the ITV soap from 2004 to 2015, and while she wanted to leave the programme to taste new challenges, she was disappointed show bosses opted to bump her alter ego off.

She told Christine Lampard on Monday’s Lorraine (July 29): “When I found out they were going to kill her I was absolutely devastated.

Read more: Emmerdale fans call for Matty to be axed

“I wanted to leave. I played her for so long and I wanted her to go off and find Amy somewhere and live in Ireland until the sun sets.

“But no, she was killed.

“I got very defensive about it and a bit sulky and huffy, and then I pulled myself together.”

Despite the initial “shock”, Charlie accepted it was right for her character to meet her maker – which occurred when a shard of glass fell on her as she lay injured in a Hall of Mirrors following a helicopter crash in the village – because the soap is “all about storytelling”.

She added: “It was a shock but it’s always the case. If they are going to find a better story for you as an out that way then… because it’s all about storytelling and that’s what you’re signing for.”

Charlie did return to Emmerdale as a ghost for Robert Sugden’s Christmas reckoning in 2017.

The actress also talked about her latest role in Ackley Bridge, in which she plays Sue Carp. Charlie described her latest character as “horrible”, “lazy, and a “racist”.

“The writing’s so great,” she said. “If you’re landed the mantel of playing a casual racist, you’ve got to be in the right hands because if it’s not countered you’re perpetuating these appalling ideas. The writers are canny.

“The kids are the heroes, she’s wrong, the young people are right. I know it’s handled really deftly.”

Christine remarked that the pace is different to Emmerdale who are pushing out six episodes a week.

“[Ackley Bridge] is single camera so there’s time to light, time to talk to the director and run your lines with other actors,” Charlie agreed.

“With Emmerdale it’s fast and furious, it’s great, but in this you’re a little more up to speed, like you’re making a film rather than telly.”

Do you miss Val Pollard in Emmerdale? Leave us a comment on our Facebook page @EntertainmentDailyFix and let us know what you think!