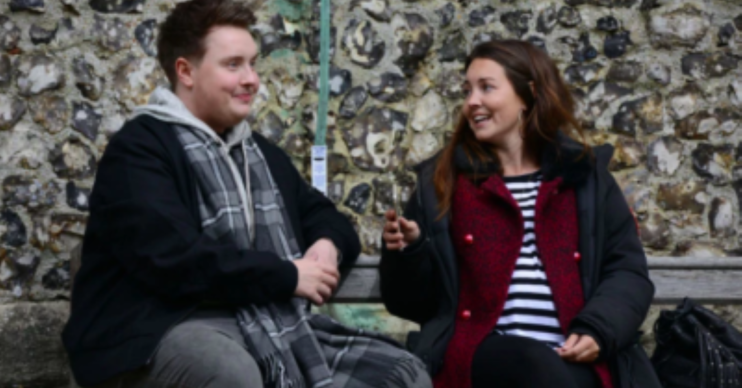 Alongside the snaps he wrote: “Don’t say you can’t change. Because you can. It can take time but you will get there. I’m still on my journey but loving me more each day.”

Don't say you can't change. Because you can. It can take time but you will get there. I'm still on my journey but loving me more each day.#happy #Loveyourself #weightlosstransformation pic.twitter.com/YuLeAb4e5C

His followers commented telling Riley how great he looks.

One wrote: “What a journey so far! You look fantastic! x”

During the three-part series, the celebs lived off 400 calories a day and did eight hours intense training.

They were put through their paces by Russian taskmaster Galia Granger.

EastEnders: Who is Kyle Slater?

Fans of the soap will remember Kyle, who appeared on screen from 2015 until 2016.

He is Stacey and Sean’s half-brother. Their father Brian had another family which included his three other daughters Sarah, Shannon and Siobhan.

At first Stacey believed Kyle was a stalker and was confused as she believed she had three half-sisters.

However Kyle revealed that he was Sarah and was actually born female. He since had a sex change and was now known as Kyle.

Kyle and Stacey began to build a sibling relationship. When Stacey realised Kyle’s mum Alison, played by Denise Welch, hadn’t seen him as a man, she invited her round.

However Alison was unable to accept Kyle as a man. Although he was initially upset at Stacey for inviting her, he forgave her.

Kyle left Walford in 2016 after receiving a job offer in France.

Do you remember Kyle in EastEnders?

Have you been on a weight loss journey? Leave us a comment on our Facebook page @EntertainmentDailyFix and let us know what you think of this story.