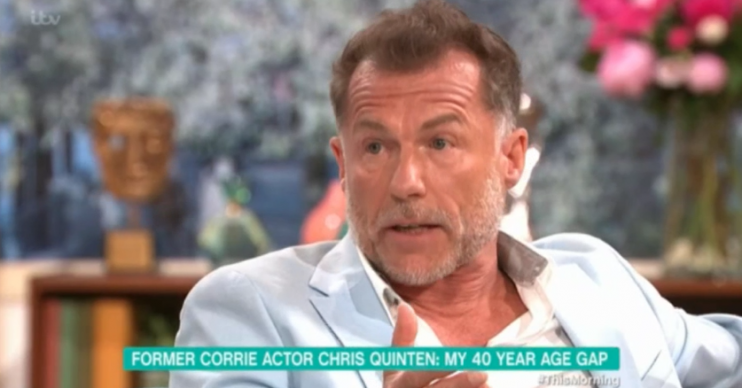 Coronation Street’s gruelling filming schedule has taken the “razzle dazzle” out of the show, according to one of its former stars.

Christopher Quinten played Gail Platt’s mechanic husband Brian Tilsley in Corrie back when there were only two episodes a week and he thinks that now that there are five it is more “intense” for the actors.

He told the Daily Star newspaper: “Now you would have to spend a lot more time learning your lines. You can’t go out razzling and dazzling.

“It is a lot more serious now – there is no messing around. Before in rehearsals you could mess around and do it differently as long as you did it right in the end.

“Now it is more intense.”

Meanwhile, Chris, 61, moved on from acting to working as a manager of gentleman’s club Secrets Hammersmith, where he met and fell in love with 21-year-old dancer Robyn Delabarre.

Speaking after their engagement, Robyn admitted her family found their 40-year age gap “really difficult” at first but says they are now “so supportive” of the romance.

She explained: “[My family] found it really difficult at first. The big age gap, it’s a big thing.

“My mum is 38 and my dad is 40. Now they’re so supportive of me. Chris is much older but we had such a nice connection we just got on well, we spoke a lot.”

Christopher, 61, added: “I’ve spoken to the mum and they all love me, thankfully. We haven’t spoken to her dad yet, but he’s OK.”

The happy couple had an “instant connection”, but because they worked together, Robyn had to keep their seven-month romance a secret from her pals, and even family, at first.

She said: “I had to keep it a secret, it was really hard for me. I had to lie to other dancers, my family.

“They [the dancers] are fine about it now, but I think they were a bit disappointed I didn’t tell them.”

She has since been moved on to work at another Secrets establishment after news of their relationship became public knowledge.

Chris added: “We don’t work in the same club now though, because when they found out they moved her from Secrets Hammersmith to the other three clubs they have.”