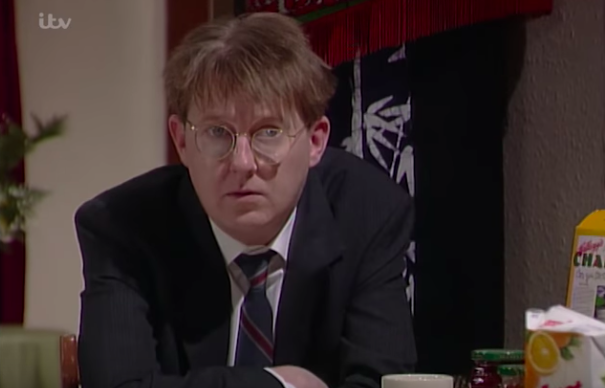 Kevin Kennedy played fan favourite Curly Watts in Coronation Street for 20 years, a role many viewers would love to see him reprise.

But the actor, 58, is currently portraying a very different character – and he looks unrecognisable in the role.

Kevin has taken on the role of Cinderella’s muddled and confused father Baron Hardup in pantomime at Cambridge Arts Theatre.

Former I’m A Celebrity… star Wayne Sleep will play one of the ugly sisters in the production, while Liza Goddard will play the Fairy Godmother.

And his fans were quick to comment on his changed appearance – his ruddy nose and cheeks, black eyeliner and hair sticking up on end.

Many compared the actor to a very famous late comedian, with one typing: “Stan Laurel double!”

Another said: “AKA Stan Laurel???”

Kevin left Corrie in 2003, after 20 years playing unlucky-in-love Curly whose ill-fated relationship with Raquel Woolstenhume – aka Sarah Lancashire – had viewers rooting for them both.

After leaving the ITV soap, Kevin went on to star in Blue Murder, Doctors and Holby City – as well as many stage roles.

Just this week, Kevin hinted that his character might be returning to the soap.

Alongside the photo, Kevin wrote: “I wonder what goes on here?”

I wonder what goes on here ? pic.twitter.com/sXxSTMRYST

Fans rushed to tell the former soap star how much they’d love to see him return.

One tweeted: “Would love to see you back on the Street.”

A second commented: “A Rovers Return would be amazing.”

A third added: “It would be great if you came back for a visit to see your old friends.”

Would you like to see Curly Watts return to Weatherfield? Leave us a comment on our Facebook page @EntertainmentDailyFix and let us know what you think!