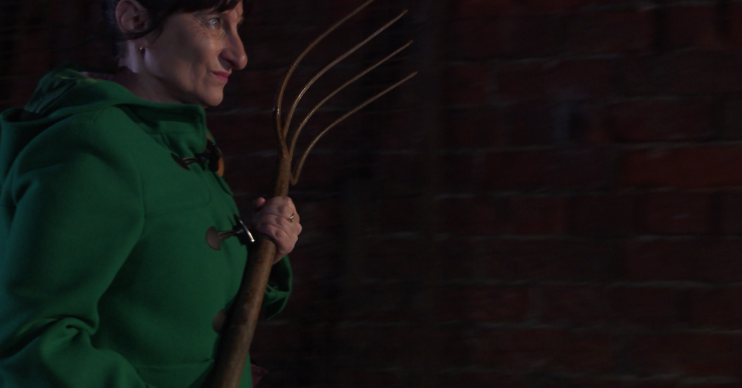 Is it all over for Tony?

It’s going to get dramatic in Hollyoaks Later as the new trailer teases the fate of serial killer Breda McQueen and a captive Tony Hutchinson!

From Breda’s secret, to the arrival of Edward’s daughter Verity, it’s going to be a dramatic winter.

Somehow Mercedes has found Tony in the pig pen and a crazed Breda can be seen approaching with her pitchfork.

Mercedes tries desperately to open the lock and save Tony – and herself.

It looks like Breda catches her as she tells her: “You have stuck your nose in for the last time.”

Mercedes cradles Tony’s face as he looks lifeless and pale. Is this the end of Tony Hutchinson?

Sylver and Breda are engulfed in flames

Breda decides the only way out is to set the pig farm on fire and it seems she’s going to try to take Sylver, Tony, Mercedes and Goldie with her.

As she hold her adopted son in her arms, the flames arise. They’re surrounded. Will anyone survive?

John Paul attempts to save Tony and his family

John Paul arrives at the Pig Farm alongside the police and firefighters.

He’s horrified as the burning building explodes. But who is inside?

Newcomer Verity gets steamy with Sami

Sami is still struggling after getting jilted at the altar by fiancé Sinead.

But soon newcomer Verity arrives and piques his interest…

From the moment they meet, they get on very well and later they make out at Sami’s house.

Diane is flustered when Verity and Sami walk in on her and Edward kissing.

Although she claims Edward is a friend who helps her out, it looks like more than that when later in the trailer she is seen wearing nothing but high heels and a fur coat.

She soon seduces him.

Hollyoaks Later will first at on Monday January 7 at the later time of 9pm on E4.

It will air again on Channel 4 on Tuesday January 8 at 11pm.