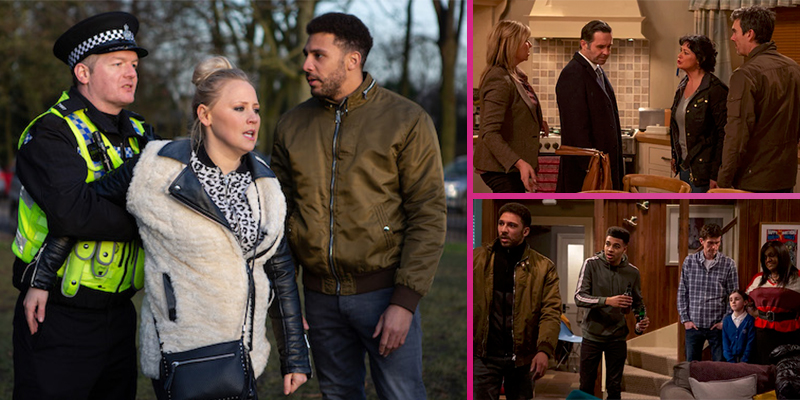 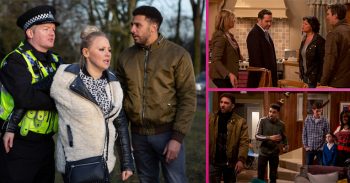 Kim is after the Barton Farm

Tracy is arrested, Rishi and Manpreet have big news, Kim is up to no good, and Charity spots a plan to make money in next week’s Emmerdale. 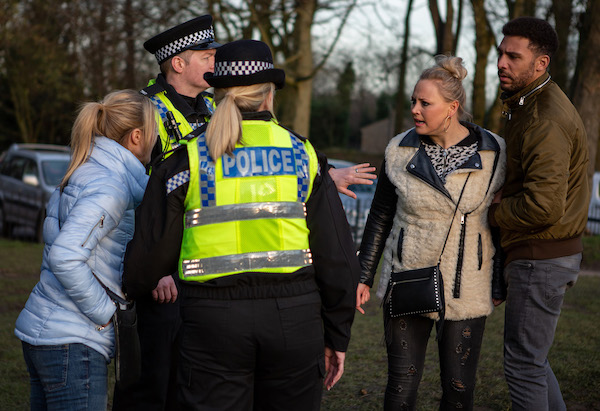 Billy and Tracy agree to pick April up and wait for her in the park. When Billy tries to get April’s attention, police approach him.

They had a call from a parent who thinks he’s acting suspiciously. He attempts to stay calm but is convinced racism is the reason for it. 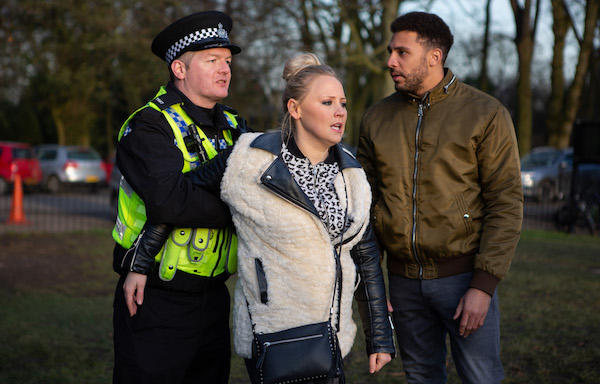 Tracy furiously confronts the parent in front of a confused April. As Tracy flies off the handle, she finds herself arrested.

Billy wants to keep the whole incident under wraps. 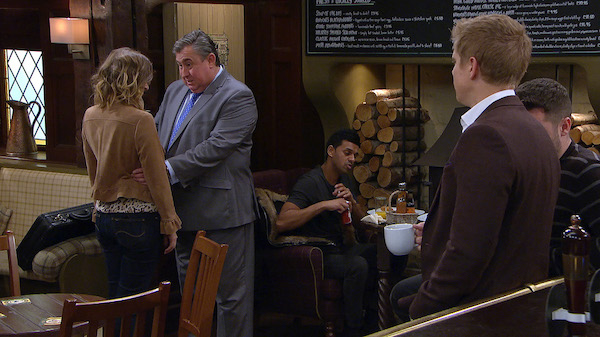 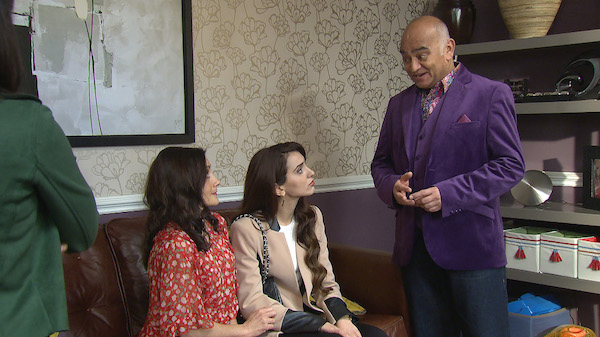 Manpreet and Rishi return from their holiday with news. Just as they’re about to spill, Manpreet’s high maintenance daughter Aiesha arrives.

She’s been dumped and thrown out and is coming to live with them. Jai goes apoplectic. 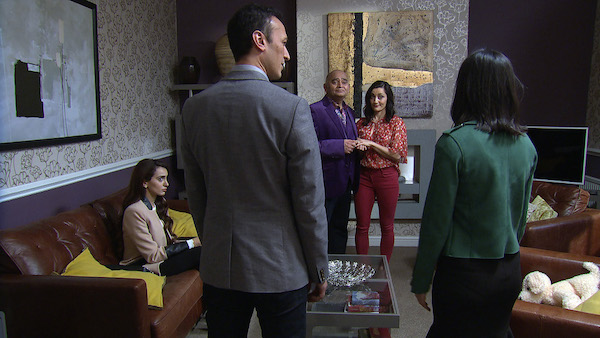 Rishi and Manpreet soon make their announcement – they tied the knot is Las Vegas on a whim! 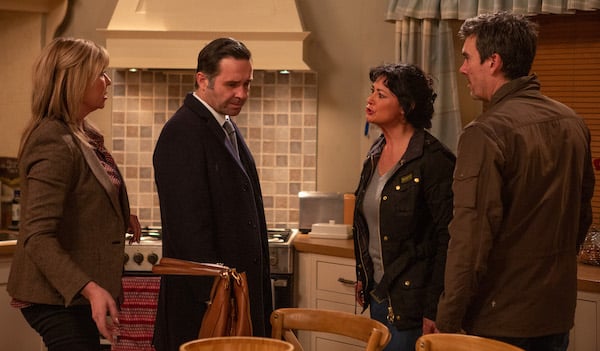 Moira is worried about Cain as he starts to plan for the worst now the police are involved.

Kim’s set on buying the Barton farm from under Cain and Moira. They are infuriated and unsettled to find her in their kitchen. 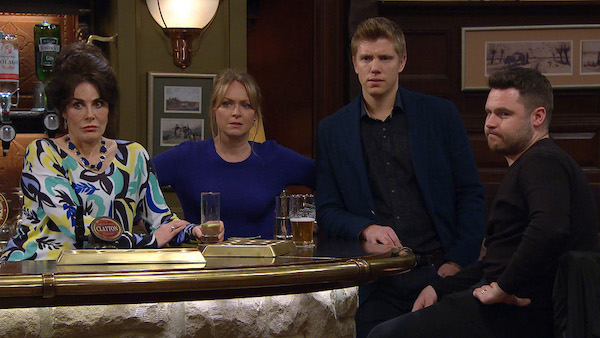 When Vanessa discovers Charity is accompanying Mike to an awards ceremony as his date, she is humiliated. As flirty Charity works her magic on Mike, Vanessa is far from impressed.

Later she overhears Mike planning to double cross Charity. Will Vanessa be able to stop it? 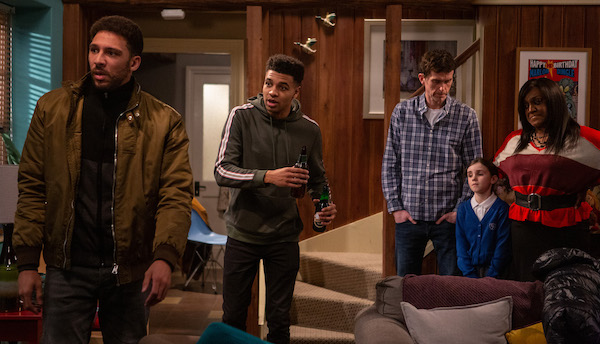 When the incident is revealed to the village, Jessie opens her heart to Marlon about the prejudices her and her sons have faced.

Angry that everyone knows what happened, Billy shoves Ellis up against a wall. He doesn’t realise Tracy has seen him 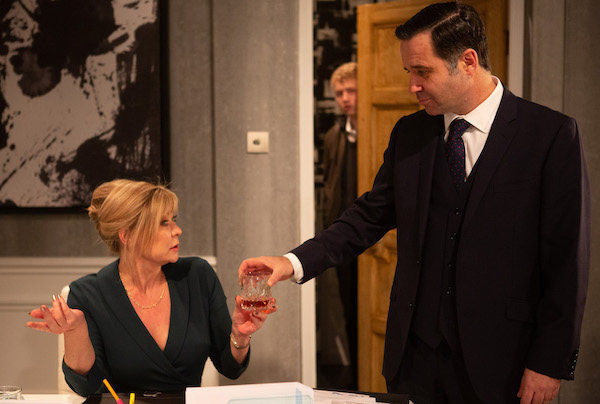 Noah overhears a conversation between Kim and Graham. He is left frightened.

He arrives at the garage to tell Moira and Cain what he heard. 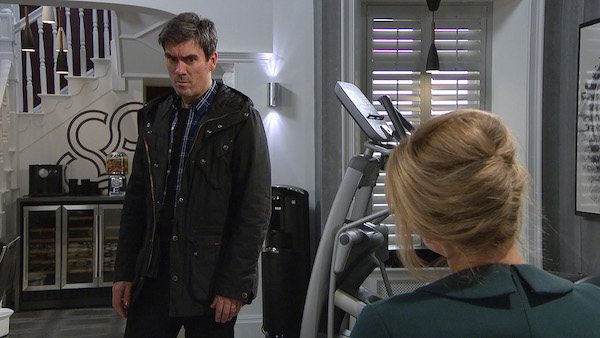 Angered, Cain confronts Kim over it. He’s left stunned by what she reveals.

Emmerdale airs Tuesday to Thursday next week with a double episode on Tuesday.