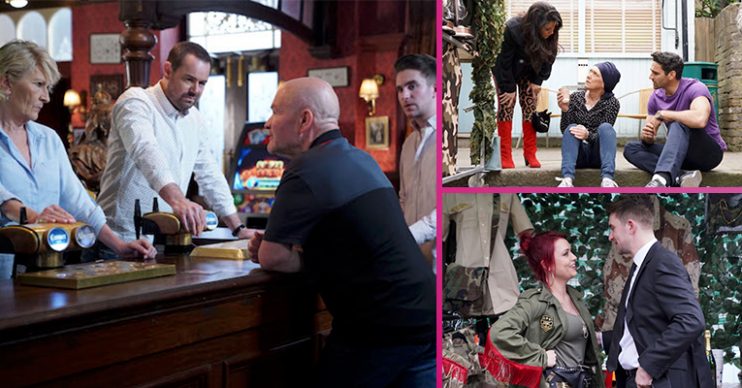 It's all kicking off as Pride begins

Callum and Stuart’s dad arrives, Stacey is prepared for a fight, and Bernadette discovers the truth about Sophia in next week’s EastEnders. 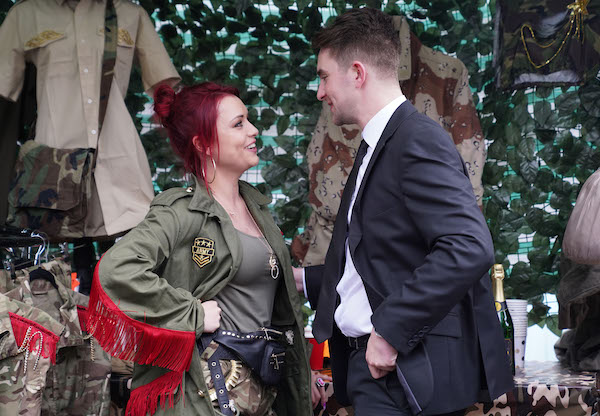 As Whitney opens her new market stall, she asks Callum about inviting his parents to their wedding, but it’s clearly a sensitive subject.

She turns to Stuart who urges Callum to think about it.

After talking to Whitney and Stuart, Callum decides to reach out to his dad.

Later, Tina seeks Whitney’s help in making shirts for the Pride celebrations at the club. 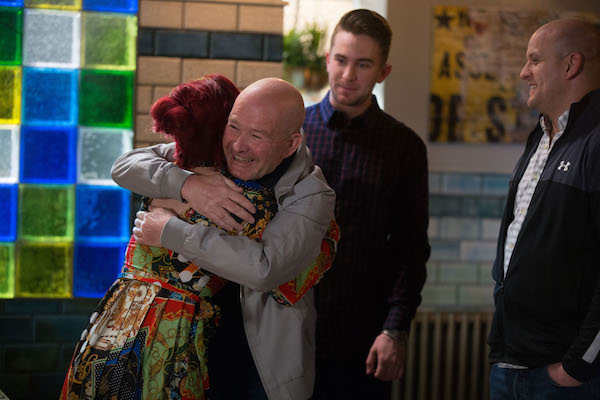 Callum prepares to meet his dad, Jonno, but when his nerves get the better of him, Jay gives him a pep talk.

At the restaurant, Stuart and Callum are reunited with Jonno, who immediately charms Whitney.

When Jonno goes for a drink in The Vic, he gets off on the wrong foot with Ben and Phil. 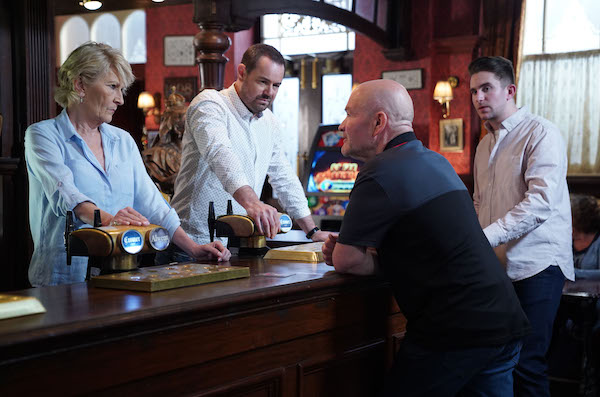 As Whitney uses Callum as a model for her Pride shirts, Stuart suggest spending some time with his brother but feeling uncomfortable in the shirts, Callum makes excuses, leaving Stuart upset.

After letting his brother down, Callum finds himself going for a drink with Jonno at the Vic.

Have Callum and Ben been caught out? 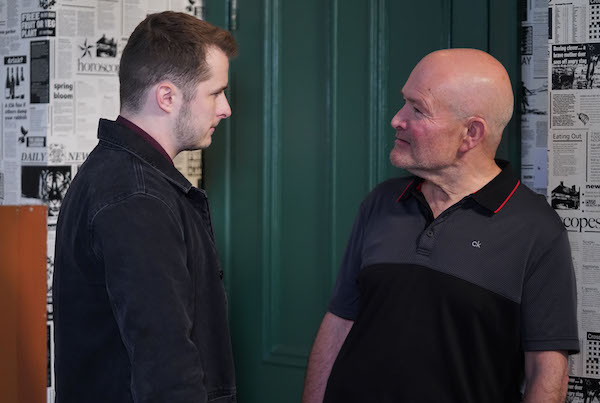 As Mick warns Callum that his dad is trouble, Callum is alarmed to realise Jonno has followed Ben to the toilets where they come to blows.

Jonno is left seething and storms out followed by Callum.

Later, Ben and Callum talk about what happened and Ben offers advice to Callum based on his own experiences.

As Ben kisses Callum on the cheek, Stuart witnesses the exchange… 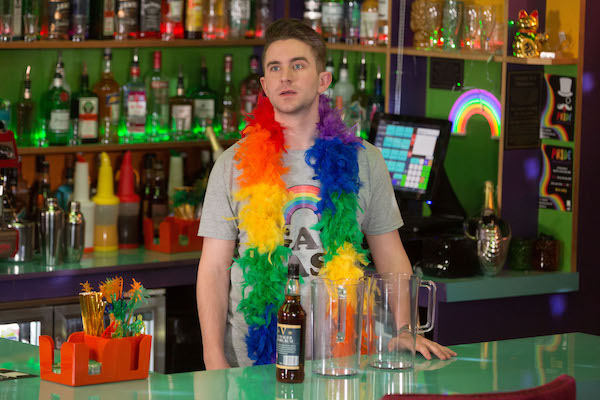 On the day of Pride, Callum gets more than he bargained for when he is roped into helping at the Prince Albert. Tina shows him the ropes.

Callum is mortified when Stuart comes into the bar and reveals he saw him with Ben the night before. Will Callum tell Stuart the truth?

The Slaters prepare for battle 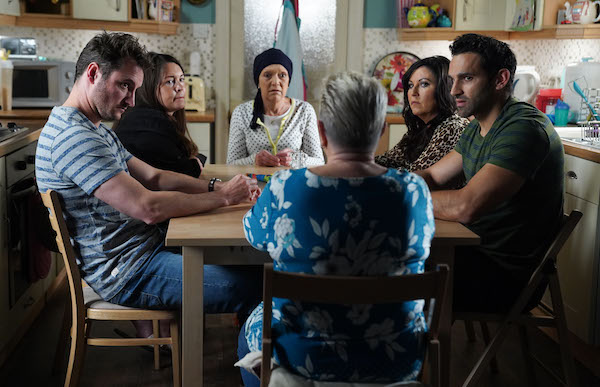 When Stacey receives a letter from Kush’s solicitor about custody of Arthur, she’s fuming.

Jean tries to keep the peace by calling a meeting for both sides to talk but as the conversation becomes heated, Jean struggles to deal with the stress and becomes unwell.

After tending to Jean, Stacey returns to Kat and Kush, and insists her mum can’t take the stress of all of this and tells Kush she will be hiring a solicitor herself.

Back home, Kush shares his concerns about finding the money, but with Phil’s money on her mind, Kat assures him it’ll be okay. 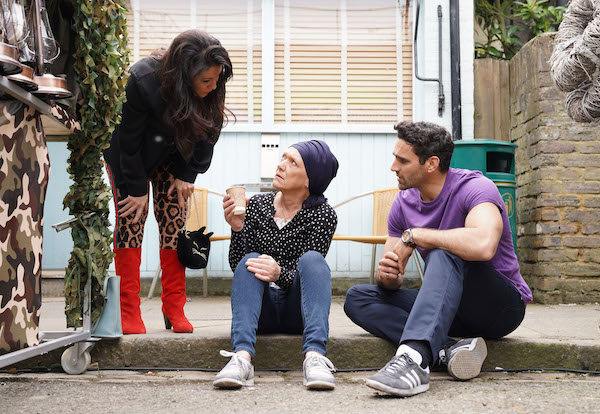 Kat does her best to support Kush but after an incident with Jean, they find themselves at loggerheads with Stacey again.

After Jean gives them a harsh reality check Kush wonders if they have taken things too far but Stacey refuses to compromise.

He starts to panic about what he’s got himself into and breaks down, leaving Kat to make an offer – she can pay for a solicitor.

However as she goes to retrieve the money from Alfie, she’s horrified to find it’s gone.

Bernadette discovers the truth about Sophia 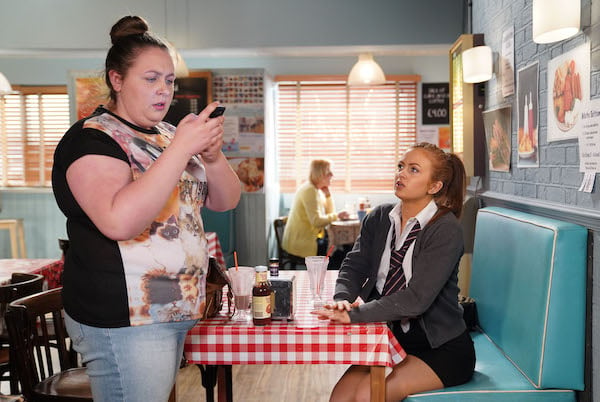 As Bernadette obsesses over Sophia, Tiffany reaches out to Bobby and offers some advice.

She later decides to make amends with Keegan. Tiffany realises Bernadette is besotted with Sophia.

Bernadette begins to grow suspicious. She spots Tiffany sending a message as Sophia.

Is Tiffany and Bernadette’s friendship over? 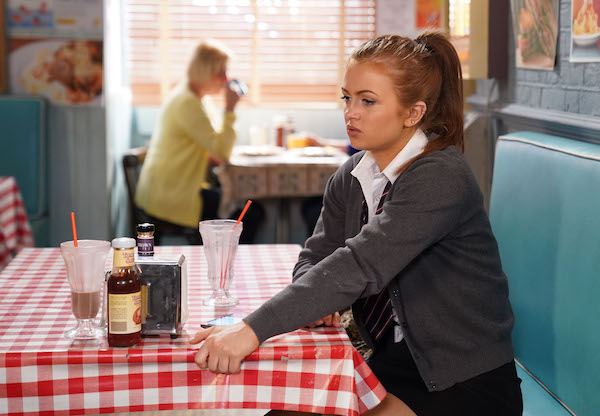 Bernadette is devastated to realise the truth. Back at the Taylors’ Tiffany tries to justify her actions.

Will Bernadette forgive Tiffany or is their friendship over? 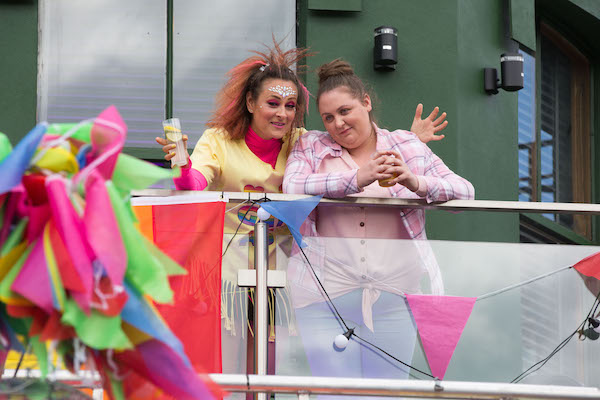 At the bar Tina spots Bernadette looking lost and offers her some words of wisdom. Later on, Tina is chuffed to see Bernadette joining in on the celebrations.