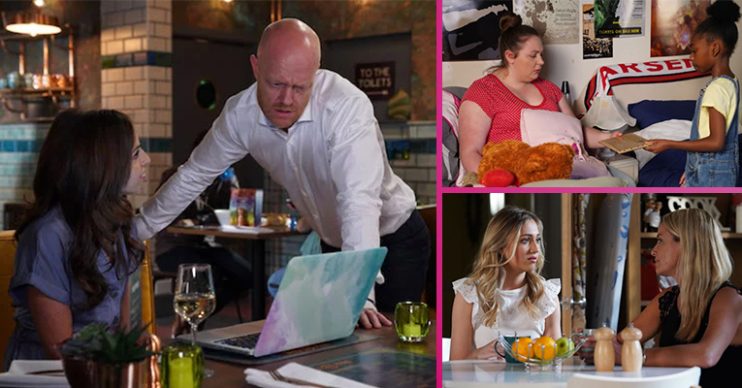 Max breaks down to Stacey

Stacey tries to help Max, Tiffany decides to go back to Milton Keynes and there’s news in the Taylor house in next week’s EastEnders.

Stacey sacks Martin off for Max 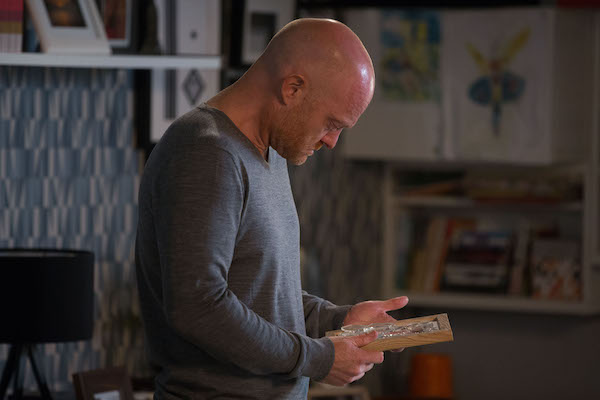 After some advice from Ruby, Stacey suggests a romantic meal to Martin that night, to make up for giving him a hard time.

Later, Stacey gives Max some stern advice when he injures himself on a broken picture frame but is horrified at what she finds when she helps.

As Max completely breaks down, Stacey ignores Martin’s calls. When she finally speaks to him, she’s surprised at how understanding he is when she explains she can’t make dinner. 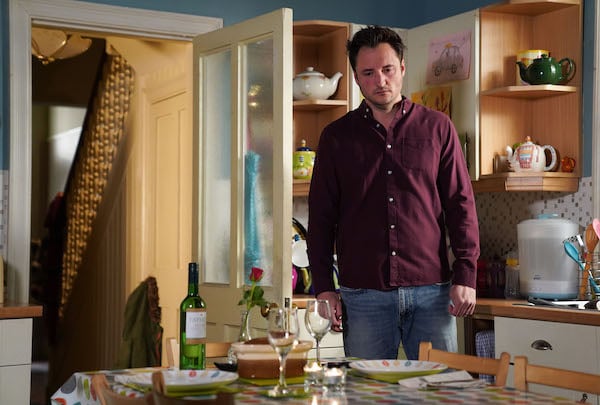 As Stacey checks on Max, he makes a shocking admission and, across the square, Martin glares at Max’s house.

Stacey panics when she wakes up at Max’s and quickly exits. After giving Kathy food for thought about Max in the cafe, Stacey promises to make it up to Martin with another meal but Martin is suspicious. 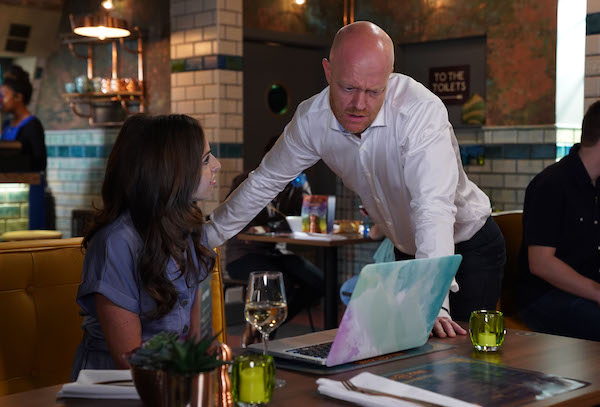 Lola comes to Ruby’s rescue when she panics about her date later that day. Ruby’s date doesn’t go to plan and her day gets worse when she struggles with her work accounts.

Max helps and impresses Ruby. She sees him in a new light…

Max comes between Stacey and Martin? 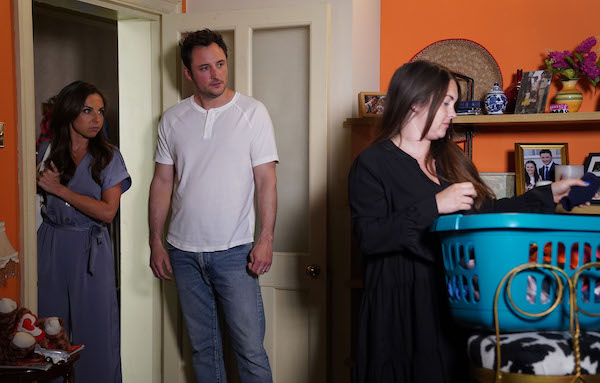 Despite Kush’s advice Martin’s adamant he wants answers from Stacey about Max. But when he arrives home to see Stacey making dinner, he decides against it.

When he realises Stacey’s cooked extra for Max, Martin stifles his anger.

Max explains his and Stacey’s history to Ruby 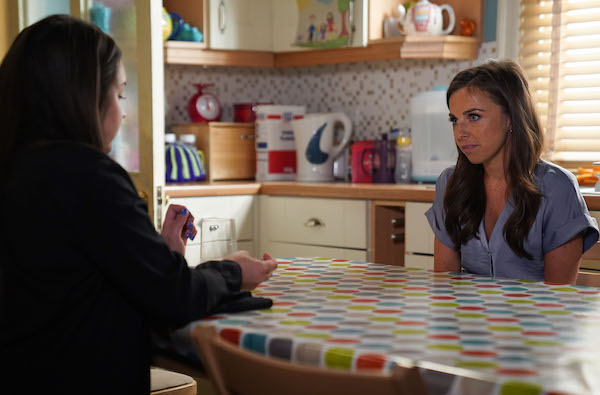 Ruby is confused at Stacey’s reaction to seeing her with Max. Max explains him and Stacey’s history.

Ruby feels awkward and leaves. Is any budding romance over before it’s started?

Tiffany decides to go back to Milton Keynes 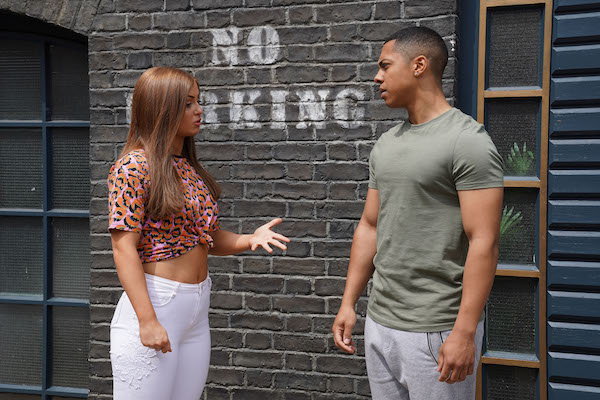 Whitney is alarmed when Tiffany tells her she’s moving back to Milton Keynes and, despite her efforts to convince her to stay, Tiffany is adamant it’s for the best.

After some support from Bex, Tiffany attempts to make amends with Keegan but his reaction convinces her further to leave.

Sonia is determined to give Tiff a proper send-off and arranges a picnic but when Whitney invites Keegan along, his response leaves Tiffany gutted.

Later, Keegan prepares for a day at Gray’s office and is inspired by one of Gray’s colleagues. 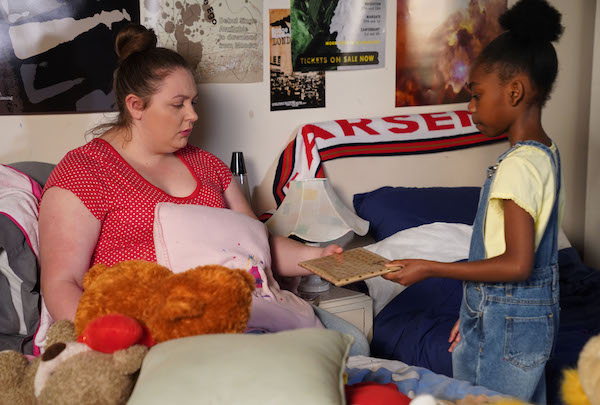 Gray urges Keegan to speak to Tiffany but he bottles telling her how he fells and a devastated Tiffany throws the present she bought Keegan and Bernadette in the bin.

At the Taylors’ place,  Keegan announces he’s quitting school and, despite Mitch berating him, Keegan is defiant and tells his family Gray inspired him.

Angry, Mitch marches over to No.1 and and Gray throw insults before the pair come to blows, to everyone’s horror.

Amidst the argument, Bernadette goes to her room and Bailey follows her to show her Tiffany’s discarded present. 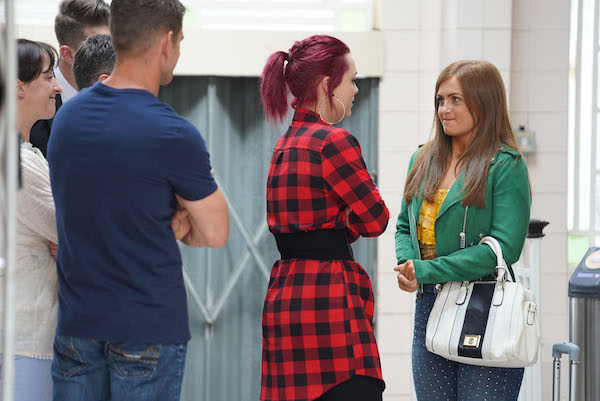 Bernadette begs Keegan to stop Tiffany leaving. After all the drama with his dad and seeing Tiffany’s present, he races to stop her.

At the tube station, Keegan pours his heart out. What will Tiffany do? 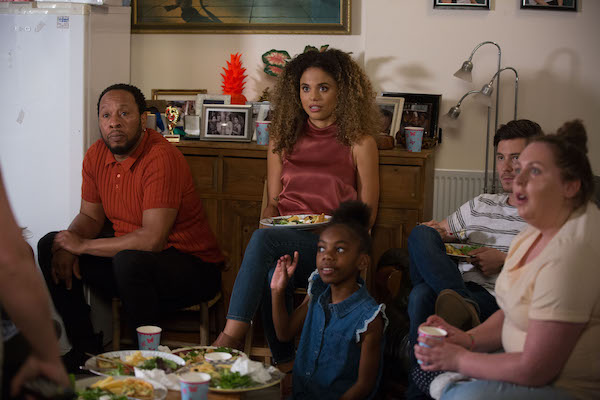 They aren’t prepared for her announcement… What could it be?

Not everyone knows Louise is expecting… 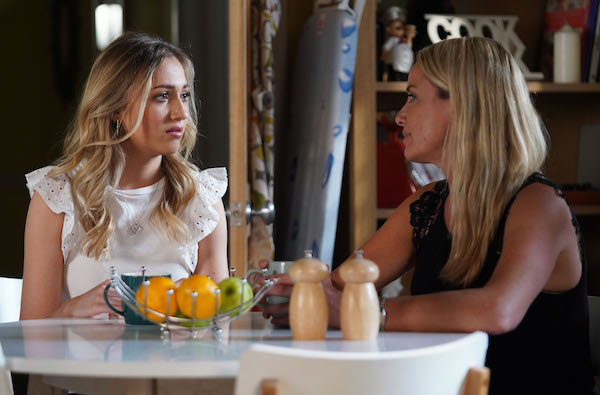 Louise’s school friends mock her for being pregnant but Mel witnesses it and offers her support.

Mel and Louise plan a day out but Mel senses something isn’t right and gets Louise to open up.

After learning Louise hasn’t told her mum she’s pregnant, Mel urges her to break the news. How will she respond?