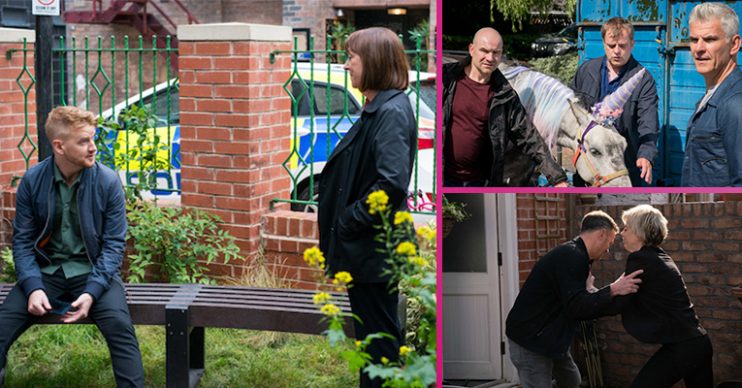 The police haul Gary in, Tracy and Liz make a discovery and Paula puts the Websters in danger, in next week’s Coronation Street.

The police take Gary in 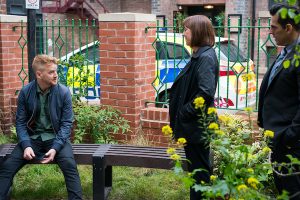 Gary lets himself into Rick’s house, helps himself to one of his jackets and starts to smear it in anti-vandal paint. Sharon catches him red-handed.

The police haul Gary in. Toyah and Imran apologise and reconcile with Nick and Leanne. 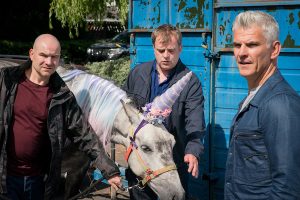 Tracy moans to Steve that she’s sick of driving a cab and can’t wait for him to get his licence back. Steve and Tim exchange guilty looks.

Steve and Tim have another successful unicorn party. After the party, they are intrigued to see Robert in a pub garden with Vicky.

Tracy and Liz make a discovery 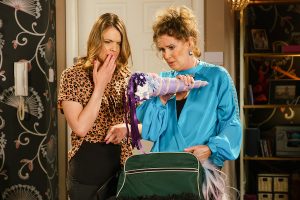 When Adam lets slip that Steve got his licence back a while ago Tracy is fuming and Liz reckons he’s up to something.

They rifle through Steve’s holdall and are shocked to find Liz’s extension, glitter and a strap-on unicorn horn.

As Tim and Steve set off to a unicorn party, Tracy and Liz follow them. They are stunned to see Steve and Tim in the back of a horsebox dressing Tiny. 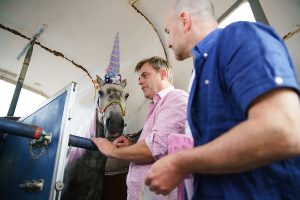 Tracy tears a strip off Steve for lying about his taxi license and setting up a business behind her back. Steve and Tim beg her to do one last party as they don’t want to let the kids down.

Steve and Tim let themselves into No.4 to find a tiddly Sally, Tracy, Liz and Michael lounging in a hot tub.

Steve lets slip to Tracy that he saw Robert and Vicky together and Robert made out he’s helping Tyler find a job… Tracy’s intrigued.

Paula puts the Websters in danger 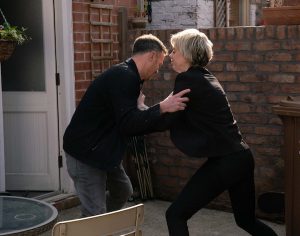 Paula calls into No.13 and explains to Sophie and Kevin that her house has been burgled for a second time and later Sophie invites her to stay the night.

Kevin voices his concerns about the age gap between Paula and Sophie to Paula but says she’s welcome to stay at No.13… as a passerby steals his keys.

When Kevin gets a call from Roy to say he’s broken down he reluctantly leaves Jack home alone as he goes to help.

The man who stole Kevin’s keys lets himself into No.13 and begins rifling through Paula’s legal papers but a terrified Jack realises there’s an intruder and texts Kevin, hiding under his bed. 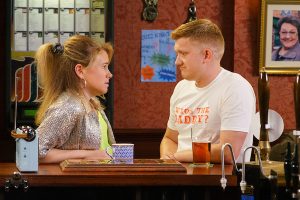 Jane from Radio Weatherfield interviews Gemma and Chesney about their quads. In the Rovers, everyone gathers to listen.

When Chesney admits they aren’t married Jane urges listeners to tweet their support for Gemma and Chesney to marry.

As customers make cash donations towards the babies’ futures Chesney plucks up the courage and tells Gemma he never stopped loving her and wants to try again.

As he leans in to kiss her, they’re interrupted by the arrival of Gemma’s mum Bernie. 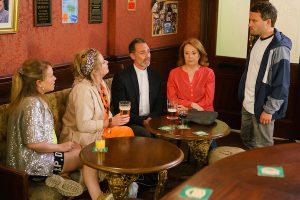 Bernie reveals she’s about to be made homeless and needs money. Chesney’s appalled when Gemma offers her the cash from the charity collection.

He lays down the law and refuses to hand over the money to Bernie. Paul calls into the Rovers and is horrified to find Bernie there, warning Gemma it’ll end in tears before storming out.

Bernie tries it on with Chesney 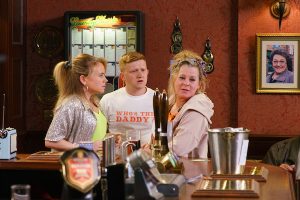 Chesney apologises to Gemma for being hard on her mum and says she can stay at No.5 and he’ll sleep on the sofa.

Gemma’s grateful but as he prepares to sleep on the sofa, he’s horrified when Bernie suggests he could share the big bed with her.

Chesney’s freaked out when he finds Bernie naked in the kitchen and when she suggests they spend the day in bed, Chesney quickly makes an exit.

He confides in Paul who confronts his mother, ordering her to keep her hands off Chesney, but she’s quick to lie to Gemma, making out Chesney is making her feel uncomfortable as he has the hots for her.

Maria makes a run for it 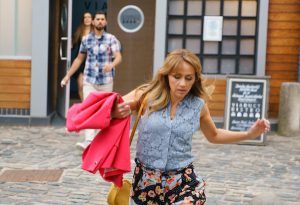 Ali suggests he and Maria have lunch but she already has an internet date with Anthony. Maria’s had enough of dating and does a runner, crashing into Ali on the street and injuring her foot in the process.

He helps her home but Maria gives him short shrift.

When Alya and Ryan clock Ali gazing at Maria, they come up with a plan to dupe them into having lunch together at Speed Daal.

Ryan and Alya set up Ali 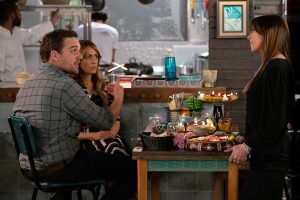 Although it’s initially awkward, they’re soon getting on well and the chemistry is evident.

When Michelle suggests that Maria is simply after Ali’s money, she’s mortified and Ali casts a look of disbelief at his mother.

Michelle later apologises to Maria, admitting she’s protective over Ali and Maria assures her it’s fine and at nine years her junior, it never would’ve worked out anyway.

Ali overhears and is gutted, while Maria is mortified.