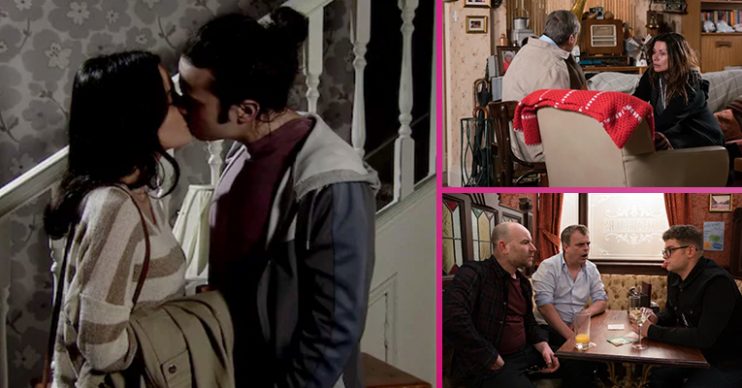 Carla returns, Steve find himself in a dangerous situation, Kirk meets a talent scout, and Alina’s boss is not impressed with Seb in next week’s Coronation Street. 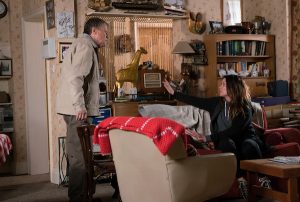 Roy returns from Portsmouth and is shocked to see the missing posters for Carla. He is filled in by the Connors and he and Johnny go to the hotel where Robert saw her last.

They’re shocked to see the state of her room and when they discover she left her kidney medication, they realise the urgency of finding her.

They return to the street and Roy tells Johnny he’ll never forgive himself for throwing Carla out. 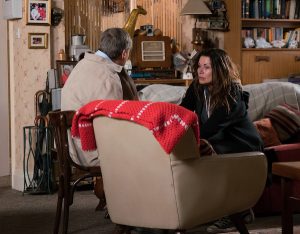 As Roy heads home he’s shocked to find Carla waiting for him. Roy is horrified at the state Carla is in as she explains that everyone is out to get her and she knows Kate is hiding Rana and telling everyone she is dead.

Roy begs Carla to go to the hospital but she refuses and starts asking after Aidan. What will Roy do?

Carla is taken to hospital 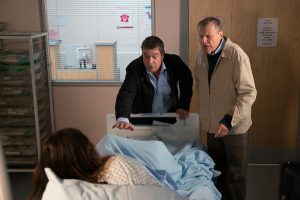 Carla wakes to find Johnny and Roy at her hospital bedside and freaks out. The doctor tells Roy Carla wants to see Peter.

Roy tells Ken who refuses to call Peter saying that nothing should get in the way of his recovery. Will Roy accept Ken’s advice? 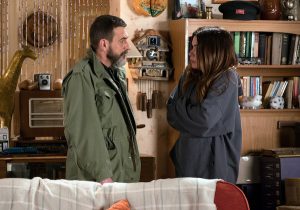 Peter finds out about Carla and the doctor tells him she is being put on anti-psychotic medication and being sent home.

When Peter tells Ken he’s moving Carla into No.1 he says they’re not welcome as Peter is not well enough too look after himself let alone Carla.

Ken is furious when he discovers Roy is letting Carla move into the flat. With Carla not wanting Roy around Ken offers him a room at No.1 leaving Peter alone to look after Carla. 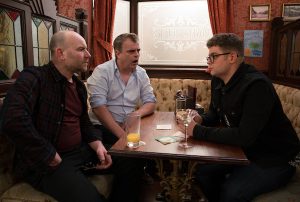 With Tracy on his back about finding a place of their own, Steve is concerned when Emma points out rival cab company GoLucky is much cheaper and you can book on an app.

When Tracy shows Steve some house details he’s forced to tell her they’re skint, so she insists he make some savings.

Tim introduces Steve to computer whizz Jay who can design a Streetcars app – but it’ll cost £20k. Steve reveals he’s got the money but it was supposed to be for the deposit on a new house. 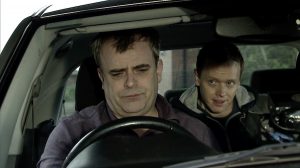 Unimpressed by Steve’s plan to spend the house deposit on an app, Tracy tells Steve to go and do illegal taxi pick ups to make some more money.

He collects a young lad who flags him down to take him to hospital to visit his mum and offers a hefty fare.

The guy asks him to stop at a garage so he can get some flowers but all is not what it seems… Steve is desperate to escape the armed robber and pleads mercy showing him photos of Amy and Oliver.

Rovers has Got Talent 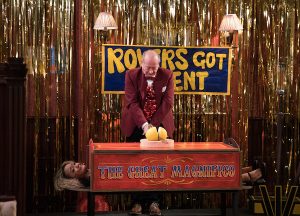 Geoff tells Yasmeen he plans to do his ‘lady in a box’ act in the Rovers talent show. But he’s annoyed when she reveals she’ll be working and he’ll have to find another assistant.

Emma tells Geoff she was a huge fan of Paul Daniels and would love to be his assistant. Geoff is delighted. 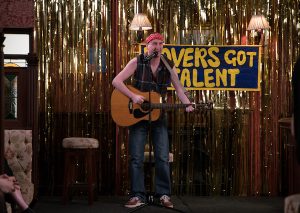 The talent show is a success with Geoff’s ‘lady in a box’ and Evelyn’s portrait painting, but Beth is embarrassed by Kirk’s self-penned song about life in packing.

When Kirk confirms he’s meeting a talent scout for lunch, Beth is suspicious of her intentions.

Beth breaks the news to Kirk and despite being hurt, he decides to go on the tour as his songs put a smile on people’s faces.

Rachel is unimpressed with Seb 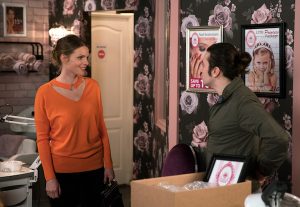 Having discovered Alina has moved to a new nail bar, Seb tracks her down. Alina’s pleased to see him but nervous her boss will be angry.

Seb offers to put up a shelf giving him an excuse to stick around but Rachel’s unimpressed to see Seb in the nail bar and orders Alina back to her work station.

Alina meets up with Seb but the evening is cut short when she announces she has to get back as she has things to do.

Seb and Alina spend the night together 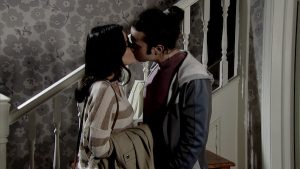 Alina has an unexpected day off and decides to hang out with Seb..

Seb refuses to introduce Abi to Alina and takes Alina back to No.11 where she agrees to spend the night.

The next day, loved up Seb offers to walk Alina to work. She arrives five minutes late with Seb in tow and Rachel makes it clear he’s not welcome at the salon.

Alina goes to see Seb and apologises for Rachel’s behaviour. She explains she is one of the lucky ones as Rachel provides her with a job and somewhere to live.