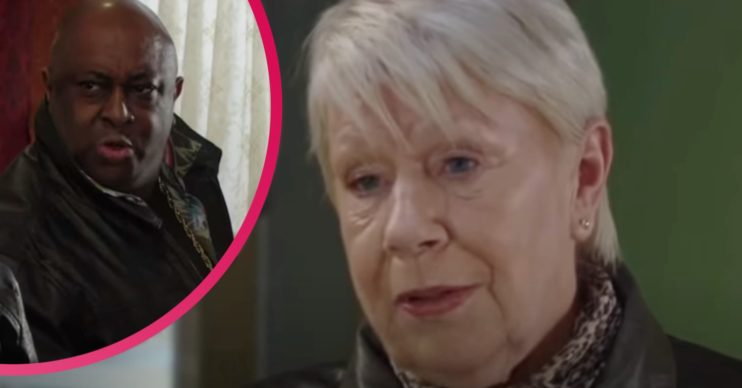 Fat Elvis in EastEnders: Who is he and has he ever been seen on-screen?

Fat Elvis has been mentioned in EastEnders many times over the years. But who is he and has he ever been seen on-screen?

Mo explained that Thin Cilla is Fat Elvis’s niece and she owed her a favour.

But who is Fat Elvis and what is his link to Big Mo?

Fat Elvis in EastEnders: Who is he?

Fat Elvis was first mentioned back in 2004.

He is a long-term business associate an love-interest of Big Mo. He is often mentioned when supplying Mo with dodgy goods to sell or when they’re involved in a romance.

In September 2014 there was at 23 Albert Square. Mo had been storing Fat Elvis’s dodgy hair products there. After Alfie set a bin on fire, the whole house caught fire and exploded.

Although Kat was inside the house at the time, Alfie went in and managed to save her.

Fat Elvis in EastEnders: Has he ever been on-screen?

On May 22 2015, Fat Elvis appeared in one episode after Mo reveals he proposed to her and she accepted.

However Kat wasn’t happy about the engagement and Fat Elvis turned around and said: “That’s no way to talk to your future Grandad.”

But the wedding never ended up happening. Several months later, Mo revealed that he had left her for his probation officer.

Earlier this year it was revealed Laila Morse would be leaving EastEnders.

Actress Laila revealed that she was moving to Spain. But despite her leaving, it won’t be the last viewers see of her.

Read more: Jack Branning in EastEnders: How many times has he been married?

Speaking about leaving, Laila told Metro.co.uk: “It has been lovely to see how much Big Mo means to many people. So for those thinking Big Mo will be gone forever, I can tell you that is not the case.

“When I first mentioned my plans to them they asked my if I would return – ‘of course’ I said. Why wouldn’t I?

“It’s a lovely place to work, I have lots of friends there so it’s not something I would even have to think about.”