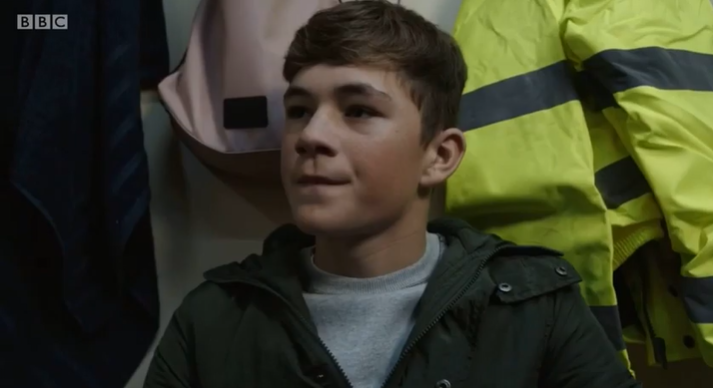 His death was hinted at TWICE

Not only did Ben Mitchell foreshadow the tragedy, but Dennis’s own mother, Sharon may have sealed his fate.

The accident has left his mum Sharon devastated.

However if you were to go back over the past year’s worth of stories and there was more than one clue that Dennis would be the one to die.

In 2018, Louise Mitchell believed that her stepmum Sharon had been sleeping with Arches mechanic Keanu after hearing a voicemail of them getting steamy.

After blackmailing Sharon, Louise demanded to know the truth.

Sharon played the voicemail back to Louise telling her that Keanu had been giving her personal training sessions.

Despite refusing to believe Sharon at first, Sharon said: “Find a bible if you like.”

But Louise said: “On Dennis’s life.”

That isn’t the only clue. Back in June, when the Mitchell family discovered Sharon was expecting, Sharon’s stepson Ben and family member Lola decided to buy her a card.

As a joke Ben picked up one that said ‘Deepest sympathies.’

Lola asked him if he was serious and Ben replied saying: “Could be ironic, couldn’t it?”

And sure enough, poor Dennis did end up dying. However there are things about the boat accident that Sharon doesn’t know.

Sharon’s best friend Ian and Dennis had an argument the day Dennis died.

Read More: EastEnders fans demand a ‘miraculous recovery’ for Daniel because they don’t want him to die

Ian found out Dennis was responsible for Bobby Beale’s online harassment, which led to Bobby being beaten and needing life-saving surgery.

Ian locked Dennis in a room on the boat’s lower deck planning to take him to the police after the party.

Dennis left Sharon a voicemail telling her what Ian had done.

As the boat crashed, Ian tried to save Dennis and managed to get him out of the room.

But a surge of water caused the teen to drown.

But will she ever listen to the voicemail? Will she find out what happened with Ian and Dennis?

Did you spot the clues? Leave us a comment on our Facebook page @EntertainmentDailyFix and let us know what you think!