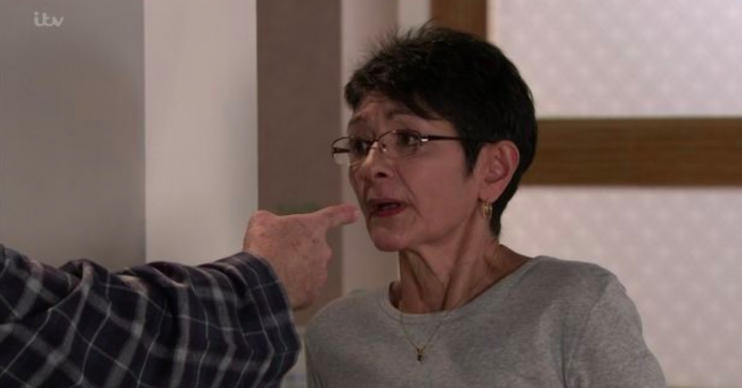 He's controlling every penny she has

In recent scenes, he managed to gain control of her bank account and the family business, meaning that she was left needing his permission to spend her own money.

That’s it Geoff you spend all Yasmeen’s money #Corrie.

Over recent weeks, Geoff has been giving Yasmeen an ‘allowance’ to spend on food shopping and items for the house and has been keeping her away from the restaurant as best he can.

Geoff has even been seen hiding a wad of cash in the house, after asking Yasmeen if she could remove some money from the restaurant for a holiday.

Yasmeen refused but Geoff clearly had other ideas and took the money without her permission.

Read more: Both Bethany and Jade have left Weatherfield

Geoff has full control over Yasmeen’s money, and last night (Wednesday March 4), he practically admitted that he plans to use it; revealing how he plans to spend it.

Viewers were left disgusted after he claimed that it was his own money, not his wife’s funds.

He told his thrilled son, Tim Metcalfe that he would help pay towards his upcoming wedding to Sally Webster.

He didn’t just offer to cover the catering costs, but he planned to pay for the entire day using Yasmeen’s cash, shocking viewers further.

Tim was surprised by how generous his father was being after Geoff claimed that he had plenty of money to treat him.

Viewers were totally disgusted with Geoff’s behaviour, knowing that he would be using Yasmeen’s money without her permission and fearing that she would be left penniless.

Another fan said: “That’s it Geoff you spend all Yasmeen’s money #Corrie”.

A third fan commented: “Geoff is taking Yasmeen for every penny #corrie”.

That’s it Geoff you spend all Yasmeen’s money #Corrie

#corrie Geoff will use Yazmeen's money to pay for Tim and Sally's wedding. He will bleed her dry before she comes out of her fugue.

It’s far from the first time fans have become irate with Geoff’s behaviour.

In scenes broadcast last month, fans were left in a state of shock when he killed Yasmeen’s pet chicken, Charlotte, in a bid to punish her, going on to serve the chicken up for dinner in distressing scenes.

Do you think Geoff will get caught or do you think he will get away with controlling Yasmeen and stealing her money?