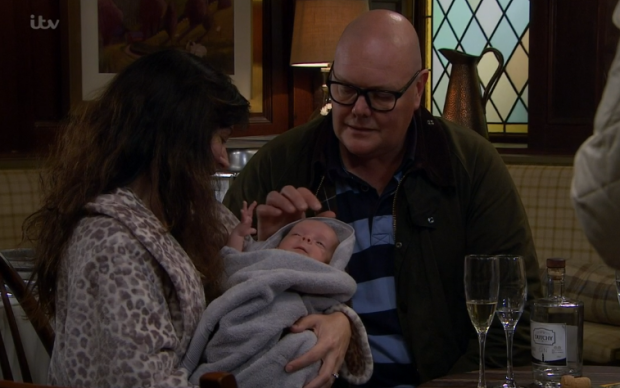 Doesn't the name ring a bell?

Viewers of Emmerdale have questioned Chas’ choice of baby name, remembering that Eve should have negative associations for the new mum.

After a multitude of bizarre suggestions from those around them, the couple decided on the name Eve, and agreed the second name of Teddy in honour of Paddy’s dad (Teddy) Bear.

While everyone in The Woolpack approved of the name and its traditional Dingle Biblical connection, those at home were left scratching their heads and accused the ITV soap of forgetting a crucial storyline.

In 2010, Chas was in a relationship with Carl King and he cheated on her with Eve Jenson.

Long-term viewers will know that Chas and Eve clashed when Carl cheated on Chas with Eve, played by Suzanne Shaw.

Writing on Digital Spy Forums, one viewer said: “Are the Emmerdale writers completely forgetting about the Chas, Carl King and Eve Jenson triangle?

“I was hoping there’d be a brief comment from Chas about it when the name got mentioned but no. Edna Birch’s relative Eve Jenson…

“Carl and Eve had an affair a number of years ago behind Chas’ back leading to her revenge storyline. Continuity and all that. A strange choice for a name.”

@emmerdale as if Chas would call her baby Eve after Carl who she loved had an affair with an Eve!!
Not well thought out!

yeah but seemingly the writers, Chas and the rest of the villagers have forgotten that

After Eve who had an affair with Carl King whilst he was in a relationship with Chas, which resulted in Chas dumping him at the alter… yep lovely name 😂

Over on Twitter another baffled fan typed: “Carl cheated on Chas with Eve. You telling me you can’t remember Christmas Day 2010? It was a big scam story.”

Another said: “Why on earth did the writers get Chas to call the baby Eve when Carl King had an affair with Edna’s granddaughter Eve behind Chas’ back? If I remember that happening then surely the writers would.”

A third added: “As if Chas would call her baby Eve after Carl who she loved had an affair with an Eve!! Not well thought out!”

“So Chas named her daughter Eve without any reminder of the woman, a friend, who ruined her relationship with Carl King by having an affair with him, Chas dumping him at the altar,” said one more. “Would you name your child after your partner’s mistress?”

Other soap fans were disappointed the baby wasn’t named after Dingle matriarch Lisa, who died earlier this year of a heart condition.

Would you name your baby the same as the woman your fiancé cheated on you with?  Leave us a comment on our Facebook page @EntertainmentDailyFix and let us know what you think!