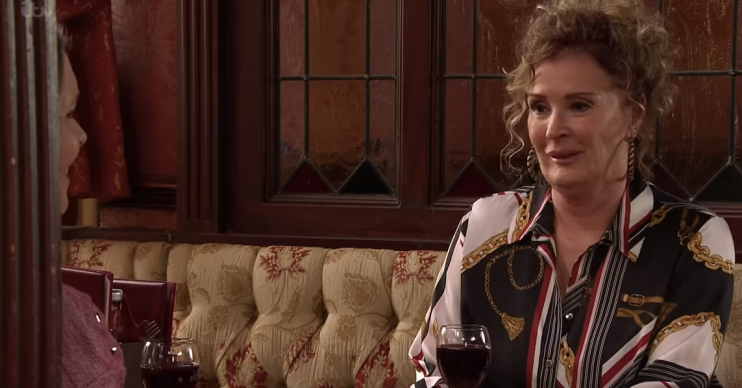 Ahead of her exit from Coronation Street, Liz McDonald has shocked fans with her dramatic transformation.

Fans couldn’t believe Liz’s new look as she unveiled it while sitting in the Rovers Return.

The iconic character is usually known for her bold wardrobe choices along with her huge drop earrings and more than a little bit of animal print.

She also tends to wear her hair up in a curly style, however, in last night’s episode she debuted a very different – much more demure – look, as she caught up with her friend, Eileen Grimshaw (Sue Cleaver) over a drink at the pub.

Showing off a more natural look, Liz wore a patterned top teamed with a pink blazer and straightened her usually curly hair.

She ditched her normal makeup and opted for a far more toned down look, which made her look like a completely different person.

While another commented: “Blimey, look at Liz, looks like she’s found God and is off to the church #Corrie”.

Blimey, look at Liz, looks like she's found God and is off to the church #Corrie

Liz and Eileen were in the Rovers Return having a catch-up as they talked about her son Steve McDonald (Simon Gregson) finally moving out of the flat he shares with his mum.

Read more: Both Bethany and Jade have left Weatherfield

Steve and his wife Tracy Barlow (Kate Ford) are buying her dad Ken’s house now that he plans to move to a retirement village.

While Eileen was certain Liz would end up missing her son and daughter-in-law, Liz insisted that she was pleased to be rid of them.

Liz won’t be around for too long and may not get a chance to miss her son as she is set to depart the cobbles later this year.

What did you think of Liz’s new transformation – did you like her more natural appearance?

Tell us what you thought of Liz’s more natural look by leaving a comment on our Facebook page @EntertainmentDailyFix!