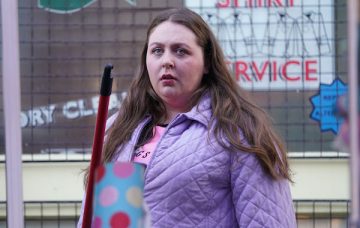 She's a world away from Bernadette

EastEnders Bernadette Taylor isn’t know for being a glamourpuss, but her alter ego, Clair Norris, has often bowled fans over with her off-screen looks.

She’s now shared a photo of her yet again looking completely different to Bernie on an outing with her friends – and fans are loving her latest look.

Posting the picture to her Instagram and Twitter feeds, Clair revealed she was having “unlimited cocktails in massive tea pots” while with her mates.

But it was her curly locks that got fans really talking.

Unlimited cocktails in massive tea pots is the way forward

“Curly hair suits you,” wrote one, while another added: “I love your hair 😍😍😍 what did you use?”

“Seriously have to ask how you got your hair like that?” said someone else.

A fourth commented: “You and your friends all look beautiful. Hope you had a great night.”

“Wow Clair you look gorgeous,” said another, with a sixth adding: “Wow Claire love your hair like that. 😘”

The actress is best known for playing dowdy Bernie, who even when she tries can’t quite get it right in the style stakes.

Fans were certainly shocked at the transformation, with many commenting how amazing she looked.

Another added: “Love her dress!”

The Taylor family burst onto Albert Square in 2017 and didn’t win themselves many fans with their loud and brash ways.

But in recent months they’ve fast cemented themselves as one of the most popular clans on the Square.

And Bernadette is no small part of that. Her coming out scenes with her mum over Christmas saw viewers heaping praise on the actress and the soap.

Are you a fan of Clair’s curls? Leave us a comment on our Facebook page @EntertainmentDailyFix and let us know what you think.