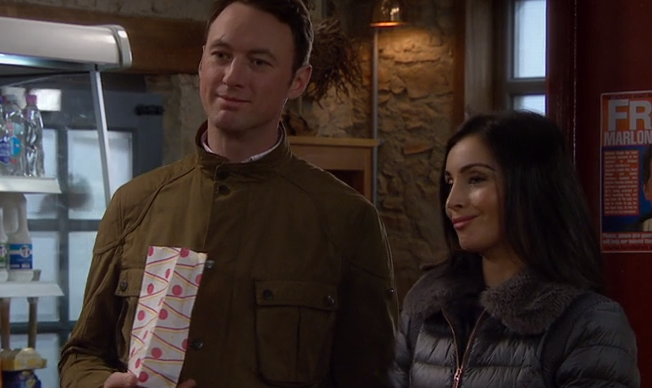 They have been sneaking around together

Fans of Emmerdale have been left ‘cringing’ at romance scenes between Liam Cavanagh and Leyla Harding.

Over Christmas, Liam and Leyla grew closer as they worked on the village pantomime together.

They ended up sharing a kiss, leading Liam’s fiancé Bernice, who is in Australia, to break up with him.

Liam and Leyla recently decided they wanted to have a proper relationship, but Liam’s daughter Leanna told him he needed to spend some time being single.

However, Liam has chosen not to follow Leanna’s advice and has been sneaking around with Leyla.

Although they’re trying to keep their romance on the down low, in public they have been making sneaky comments to each other.

But viewers have branded the new couple as ‘cringy.’

Leyla and Liam is cringe #Emmerdale

Leyla and Liam are too cringey 🥴 #Emmerdale

Fans of the show know Liam was due to marry Bernice last year but at her hen do, she received terrible news.

Bernice learnt her ex-husband Charlie, father of her daughter Dee Dee, had been left in a critical condition after a car accident.

Realising she needed to put Dee Dee first, Bernice decided to go to Australia with her in order to look after Charlie.

While she was away, Liam took part in the village pantomime with Leyla and it soon became clear she wanted more than friendship with the doctor.

Leyla and Liam are too cringy.

Liam and Leyla ended up hosting a kids birthday party together and afterwards the pair shared a kiss.

Eventually Bernice and Liam split when she discovered what had happened.

Despite Leanna and Gabby’s attempts to get them back together, they had split for good.

But how will Leanna react when she finds out her dad and Leyla are together?

What do you think of Liam and Leyla as a couple? Leave us a comment on our Facebook page @EntertainmentDailyFix and let us know what you think!