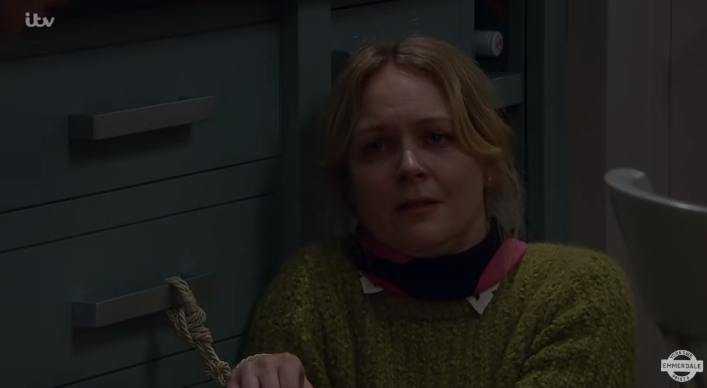 Emmerdale fans clear up why Vanessa hasn’t escaped from Pierce

Why hasn't she yanked free?

She is tied with a rope to a drawer in Laurel’s kitchen and Pierce has gagged her mouth.

So far, Vanessa’s attempts to escape have all been in vain and some viewers are confused as to why.

Many want to know why she doesn’t just yank the drawer out and smash it over Pierce’s head.

@emmerdale why doesn’t vanessa just pull that drawer out and beat the crap out of pearce?

Surly Vanessa could just pull that drawer open and lift it out?! #Emmerdale

Vanessa keeps being tied to a kitchen drawer,why doesn’t she just yank it open? #Emmerdale

@emmerdale I’m a bit annoyed with the Vanessa tied to a kitchen drawer unable to escape storyline. Everybody knows that you can pull the drawer right out of the cabinet. Insult to our intelligence!!!

Does Vanessa realise she just has to pull out the drawer and she’d be able to use it to smack Pierce with? #emmerdale

However now other viewers have cleared up the confusion – the drawers are fake!

Those watching closely on Monday would have heard Vanessa say they were “stupid fake drawers”.

The drawer is fake!

She said it was a fake drawer on Monday. She yanked it and said it’s a stupid fake draw

I don’t know how many more times this needs saying – but THE DRAWER IS FAKE. #emmerdale

There are other viewers who are more concerned about the fact Vanessa hasn’t been to the toilet in nearly a week.

@emmerdale is it just me who is wondering how Vanessa is going to the toilet??

Can Vanessa go to the toilet please

@emmerdale vanessa must be bursting for toilet shes been tied up for days pic.twitter.com/U79eMHUs25

On Monday is was revealed that Vanessa is battling bowel cancer.

So the good news is she will escape from Pierce’s clutches in one piece.

The bad news is that she now has a mountain to climb to beat this illness and get better.

Actress Michelle Hardwick added: “This is such a challenging storyline, but we’ve been working closely with Bowel Cancer UK, who have been enormously helpful to me in researching Vanessa’s symptoms and treatment.