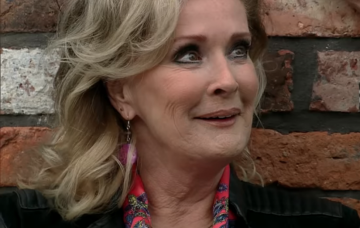 She's still got it!

Cabbie Mike Thornberry is set to return to Weatherfield after just a few months away from the soap.

But with her ex-husband Jim also making his back to the Street, could Liz’s complicated romantic life see a love triangle play out across the cobbles?

Receptionist Liz has a torrid few months coming up, as she discovers the newborn daughter she thought had died in 1992 turns up in Weatherfield alive and well.

Actress Beverley Callard was recently spotted filming scenes alongside Charles Lawson (Jim) in a Manchester graveyard – with new character Katie McDonald also in the thick of the action.

After so much shock and upset, could Liz turn to either Jim, Mike or – or even recent fling Johnny – for comfort?

It is believed she and Jim do indeed get back together, despite their previous two failed marriages.

However, rumours also suggest their reunion is not a permanent one.

According to The Sun, a show source reckons there is little chance of Liz and Jim tying the knot for a third time.

The paper claimed: “Jim and Liz have always had chemistry and even after two failed marriages there’s still a spark there.

“But in soaps love stories never run smoothly, and it’s doubtful this will end up in marriage number three.”

Maybe Liz might choose to end up with the nice guy this time around?

Actor Louis, best known for playing Mick Johnson for over 12 years in Brookie, is obviously delighted to return as Mike, having retweeted several messages wishing him all the best to his 18,000 followers on Twitter.

He is expected back as Mike on TV screens in November.