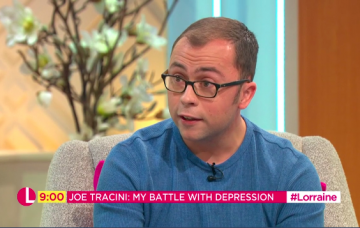 Likeable actor Joe Tracini has opened up about his 10-year battle with depression.

Appearing on today’s Lorraine show (Wednesday 19 September), the former Hollyoaks star broke down as he revealed the illness has even led him to contemplate suicide.

In a live chat with Lorraine Kelly, Joe – the son of comedian Joe Pasquale, admitted that he struggles with these thoughts “on a daily basis”.

Joe also admitted that he doesn’t think taking one’s own life is a selfish act.

He told Lorraine why he had decided to talk about it now, in such a public way.

He explained: “I think I wanted to talk about the suicide thing I’ve written recently to address the fact of why I don’t think suicide is a selfish thing to do.

“I think if somebody takes their own life, they leave a lot of questions and unfortunately they’re not here to answer them anymore.

“So as somebody that nearly did do that, I kind of just wanted to write something about what goes on in somebody’s head when they’re at that point.”

Hello you.
I’ve written this for anyone, like me, that’s living with suicidal thoughts, and to try and make sense of them for anyone that isn’t x#WorldSuicidePreventionDay pic.twitter.com/wzsC2QeYo3

Earlier this month, the actor had written about his own suicidal thoughts to coincide with World Suicide Prevention Day on 10 September.

During the interview, he added: “It’s like a daily thing for me. It’s kind of how a bit of my brain works. I wanted to just talk about that and say that certainly for me anyway, this is a thing that I deal with on a day to day basis.”

Asked what he would tell his younger self, a clearly teary Joe answered: “I honestly never, ever know what to say to him but I would just say to him what I say to myself now which is ‘in a minute this will change’.

On the importance of talking about suicide, Joe continued: “Nobody gets up in the morning and then decides that they’re going to think about taking their own life today. It’s a long old road for everybody to feel alright talking about their feelings but hopefully we’ll get there because it’s so important, it really, really is.”

Joe also explained that he feels more “confident” at the moment, and urged all sufferers to talk about it and not be ashamed.

After appearing on the morning show, their official Twitter account posted the message: “Joe Tracini received a huge outpouring of praise and support for his incredibly powerful interview about depression and suicide on this morning’s Lorraine.”

The actor, who briefly reprised his role as Dennis Savage last month, recently wrote on Twitter: “Just a reminder that depressed doesn’t mean sad. Depression is just that. When I’m depressed, it’s like somebody’s pushed a pin into my brain and deflated it like a balloon.