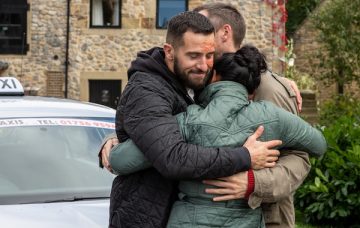 The village won't be the same without him

It’s the end of an era as actor Michael Parr prepares to leave Emmerdale as the unforgettable Ross Barton on Friday 2nd November.

But while we’re still in mourning as the much-loved character departs the Dales, here is everything you need to know about his last moments on Emmerdale.

Viewers will already know that Ross has decided to depart the Dales with girlfriend Rebecca White, and with all the bad luck the pair have had between them since they both arrived in Emmerdale, it’s not that surprising that they both want a fresh start.

Read more: Emmerdale’s Dominic Brunt on surprising problem that affects him on set

But of course, their decision to leave doesn’t sit well with their friends and family – especially when it is discovered the pair plan to take baby Seb and little Moses with them.

Moses’s mum, Charity Dingle, is fuming when she learns of Ross’s plan to take their son away from the village, and exactly the same happens when Robert Sugden finds out Rebecca is planning to leave with Seb.

Deciding that their decision to leave is causing too much hurt, Rebecca starts to backtrack on their plans and tells Ross that perhaps they should leave it a few months until the dust has settled.

But Ross doesn’t want to hear it, and with his mind made up, he prepares to leave the village alone.

But with Moses, Seb and Rebecca now staying put, can Ross really leave those he loves behind and start a new life all alone?

With it being confirmed that this is the last week we will see Ross on our screens, we know he definitely stands by his word and departs. But could Rebecca change her mind at the last moment and end up going with him?

Speaking off his last week on screen, Michael Parr, who plays Ross, told metro.co.uk recently: “Ross would be gutted if Rebecca stayed behind. He wants to play happy families.

“It’s a massive opportunity for him to turn away from his bad boy ways and go clean and straight. He’d like to do that with the girl he loves.”

Mike also revealed how he feels about leaving Emmerdale after five years: “It’s a mixed bag of anxiety, and happiness because there are other avenues that I want to explore.

Read more: Emmerdale: Sarah to die while Debbie is in jail?

“It sounds like a cliche, but I feel like I’m breaking up with Emmerdale and it’s very sad! But ultimately it’s definitely the right decision for me at this time in my life.

“I’ve had the best five years here and the opportunities that this job has given me to see the world and help friends and family have been amazing. Hopefully I can come back one day.”

Will you be sad to see Ross depart the Dales? Leave us a comment on our Facebook page @EntertainmentDailyFix and let us know what you think!