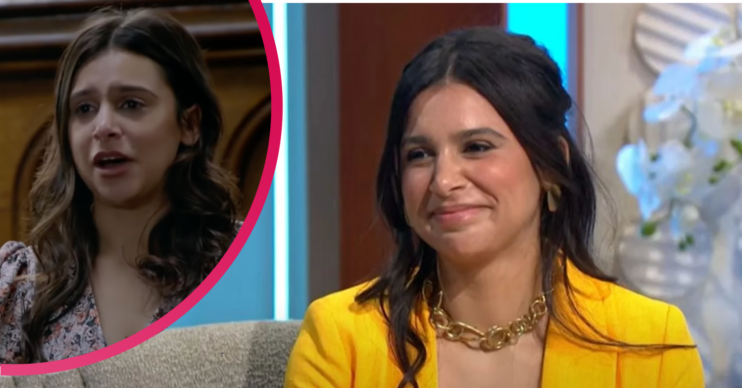 Emmerdale’s Paige Sandhu: What is she doing next following Meena’s exit?

The world is her oyster!

Paige Sandhu bid farewell to Emmerdale last night as murderous Meena Jutla, but what’s next for the talented actress?

Meena may have terrorised Emmerdale village for two years, but Paige has an army of loyal supporters.

And all of them want to know what her next move will be now Meena is behind bars.

Read more: Emmerdale cast list in full for 2022 – meet them all here!

Is Paige Mandhu going to be on Strictly Come Dancing?

While Paige is yet to make any official comment about her future plans, there has been plenty of speculation.

According to The Daily Star, 25-year-old Paige is the bookies favourite to sign up for this year’s Strictly Come Dancing.

Alex Apati, spokesperson for Ladbrokes, told the publication: “It looks like Paige Sandhu’s next move will take her to the dance floor with Strictly chiefs currently leading the way for her signature.”

Paige, who has played serial killer Meena since 2020, has revealed she’s already filming something new.

She’s remaining tight-lipped about what, though.

Speaking to ED! and other media, the actress said: “I am starting filming on something else, so that will be cool.

“Then there are other things that are potentials, so that’s really exciting. They are all (the characters) goodies, funnily enough.”

It doesn’t sound like she’s short of offers for work.

She added: “I definitely want to continue to play baddies. I love baddies. I think they’re just so much fun to play.

“I just want to continue playing characters that are wildly different to me – where you can have a lot of fun. The roles are really challenging and fulfilling, and it doesn’t really matter whether they are a goodie or a baddie.”

There are also some very unconfirmed rumours circulating on social media that Paige is set to host a Big Brother reboot on ITV2. But do take this with a pinch of salt.

Have we really seen the last of Meena?

Some Emmerdale fans think Paige will crop up again in the ITV soap that made her famous.

The show celebrates its 50th anniversary later this year and viewers think Meena will make a surprise appearance.

Many are convinced she’ll pull a prison break in October, just in time to get revenge during Emmerdale’s ‘super soap’ week.

Whatever she does, we’re sure Paige will be excellent and we wish her the very best of luck.

Emmerdale usually airs weeknights at 7.30 pm on ITV, with an hour-long episode on Thursdays.