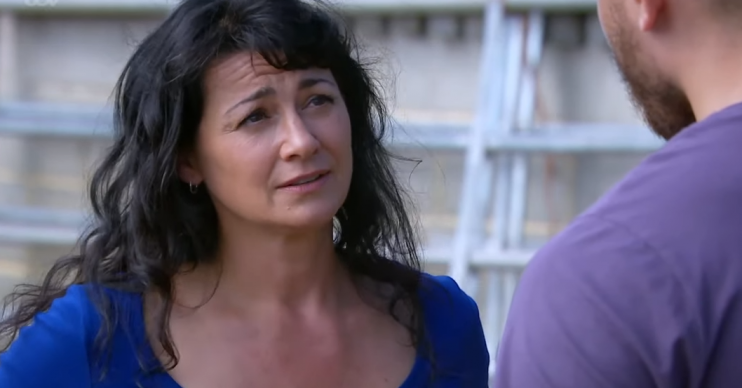 Natalie J Robb, who plays Moira Dingle in Emmerdale, has explained she thinks her alter ego can come back from everything that has happened.

The last year has been a bit of a disaster for Moira.

After starting an affair with farmhand Nate Robinson, her husband Cain found out the truth and ended things with her.

To make things worse, it was revealed Nate was actually Cain’s son.

Since the reveal, her nephew (from her marriage to John Barton) Pete moved out and left Butler’s farm to work with Nate at Kim Tate’s property Wylie’s farm.

To cope Moira has turned to alcohol and recently fell asleep drunk whilst looking after her son Isaac, leaving Cain furious.

As reported in Digital Spy, Natalie spoke about her current storyline and explained: “Moira is using alcohol as a crutch. She’s in no way an alcoholic, but her judgement is really bad and she’s making really silly decisions.”

“I think she can get back from it, though. Moira’s a tough cookie, but at the moment she’s just at the end of her tether.

“Sometimes you have to hit rock bottom before you can work your way back up.”

When asked whether Moira’s upcoming ditch scenes next week will be her lowest, Natalie replied: “I think that is, when she’s lying in a ditch and thinking that it’s okay because she’s so drunk.

“I think we can safely say that is rock bottom. She ends up in hospital.

“I think Moira can get back from this, but she’ll do things differently and figure out how to save her business too. It’s a long road back, but hopefully it won’t be as hard.”

What would you like to see happen next with Moira?