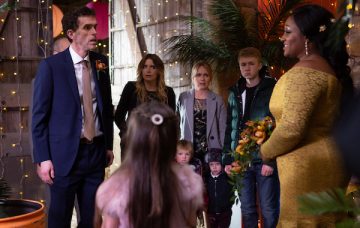 You're not eating, are you?

This Christmas time, there’ll be wedding bells in Emmerdale when Marlon Dingle is set to marry girlfriend Jessie Grant.

In a heartwarming festive twist, Jessie plans a surprise wedding for popular character Marlon in what is set to be tear-jerking romantic scenes.

Having planned the whole thing behind Marlon’s back, Jessie invites everyone to attend a Christmas party – without telling anyone apart from Ellis, April and Lydia the real reason for the celebration.

Soon the guests start to arrive, oblivious to the fact they’re actually attending a wedding and soon they are shocked to see Jessie in what is clearly a wedding dress and bouquet.

Of course, the wedding WON’T go smoothly especially after Marlon faints when it’s revealed it is in fact his own wedding day!

In an interview with What’s On TV, actor Mark Charnock reveals his character Marlon even pukes!

He said: “This year is a real treat for me because I get to throw up twice on British television on Christmas Day.

“I thought ‘can we show this on Christmas Day when people are having their turkey?’ But they seemed fine with it. So I really went for it.”

And Mark even revealed WHAT the ‘pretend’ vomit was made of, adding: “It was fruit, a chunky fruit shake! Mmm delightful. And in the second vomiting scene I throw up in a wedding guest’s hat!”

Hang on, two vomits? Are there two shocks in store for Marlon?

Mark revealed that Marlon is overwhelmed by the surprise wedding, but also admits: “He’s also very light-headed because he got so hammered the day before.

“I don’t know whether being sick on your wedding day is a bad sign or not, but coming out of that is a really delightful wedding. It turns out to be very romantic.”

Throw in a comedy stag do and a groom mix-up and it sounds like a proper Carry On Emmerdale nuptials.

Which has been your favourite Emmerdale wedding ever? Leave us a comment on our Facebook page @EntertainmentDailyFix and let us know what you think!