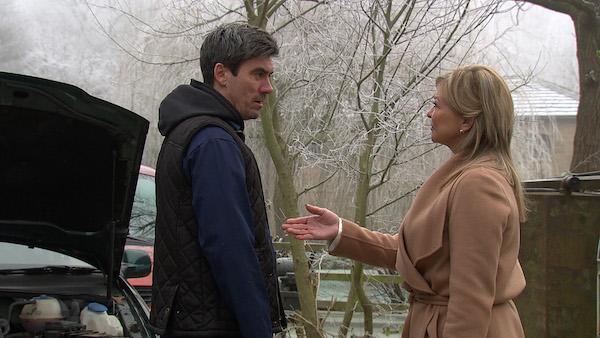 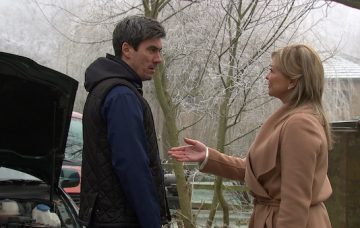 She will blackmail Cain Dingle into a sordid sex tryst

Kim Tate is going to hit disturbing new lows in Emmerdale when she returns.

Evil Kim is no stranger to crime and even ordering the murder of beloved family members, but she will horrify soap fans next week with her disturbing actions.

She will blackmail Cain Dingle into a sordid sex tryst, and threaten to send him to prison for Joe Tate’s murder if he doesn’t comply.

After coming across Cain when her car breaks down, she is left humiliated when he realises who she is and abandons her in the road.

Kim then decides to take revenge and makes it clear to Cain she knows what he did and is willing to expose him unless he gives her what she wants.

A source told The Sun: “Kim’s then onto Cain, and tells him that she’s got something on him, but she can make it go away – if he sleeps with her behind Moira’s back.

“She doesn’t care about hurting Moira or ending their marriage – so when Moira gets involved too, she vows to mess her up too.”

Emmerdale boss Kate Brooks recently teased how Cain and Moira would end up being dragged into Kim and Graham’s upcoming battle.

She said: “Cain gets caught up in the whole Kim/Graham toxic relationship.

“So there’s loads of fallout from that and Moira inadvertently ends up getting caught up in the crossfire.

“Kim’s got lots of good stuff coming up.”

Emmerdale fans have been left ‘dreading’ Kim’s return after they say she has been turned into a panto villain.

One concerned viewer said: “I love proper Kim. October’s OTT panto [expletive] was not the one and will tarnish the legacy of Emmerdale’s only iconic character now.”

A second agreed and added: “I didn’t think much to her in her original stint and that didn’t change upon her return. I too am dreading her coming back.

Do you think Kim has been ruined? Leave us a comment on our Facebook page @EntertainmentDailyFix and let us know what you think!