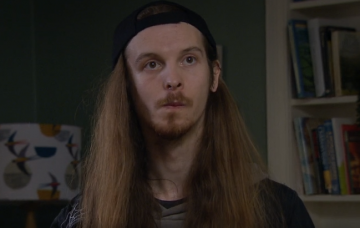 His long hair is no more!

Emmerdale’s James Moore has revealed he has cut off his long locks.

James, who plays Ryan Stocks in the ITV soap Emmerdale, has chopped his hair off.

The actor posted a picture of his hair which was cut off as a ponytail.

Read More: Emmerdale SPOILER: Lisa tells the Dingle’s that she is dying

James, who is known for his long hair, simply captioned the post “RIP”.

His followers responded to the tweet and although the majority of them were sad to see the hair go, they can’t wait to see his new look.

Years gone by, 14-year-old Charity Dingle found out she was pregnant for the second time after being held captive and raped by DI Mark Bails and his friends.

Ryan had survived and was adopted by the midwife Irene Stocks and was raised by her.

Charity got into contact with a now 28-year-old Ryan and explained the full story. Eventually DI Bails was sentenced to thirty years in prison after being found guilty of unlawfully imprisoning Charity and raping her.

In the village, he befriended Dawn and the pair began seeing each other. However, she recently ended things after her father asked her to end their relationship in order to prove her loyalty to him.

Have you ever cut most of your hair off? Leave us a comment on our Facebook page @EntertainmentDailyFix and let us know what you think!