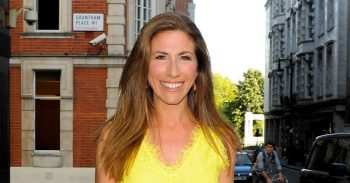 The two male characters are rushed to hospital following the incident, and the 47-year-old actress didn’t escape the day of filming unscathed either.

When asked how it was to shoot the scenes, she said: “It was fine for me. Ask the stunt lady and she’ll give you another answer, but it was fine for me. It was great. I just had to sit in front of a green screen and go through the motions of the crash.

“I still gave myself a bit of whiplash, though! I always just go for it because there’s nothing worse than a bad stunt or somebody looking like they haven’t actually hit something.”

But there looks set to be serious consequences for Megan as Gaynor has hinted her alter-ego may even be set for a stint in jail.

She added: “We’re filming the aftermath of it at the moment and dealing with all the guilt. The producers purposely keep it from us.

But Gaynor has dropped hints about the show’s car incidents before.

In August, the former Coronation Street actress admitted she hadn’t been on the Dales set since a big car crash, which occurred when the brakes on Frank Clayton’s (Michael Praed) new sports car were faulty, hinting her alter-ego had died.

She said at the time: “The thing is I haven’t been back and filmed anything since, I’m giving you a clue.

“Or maybe I’m just having some time off, who knows?”