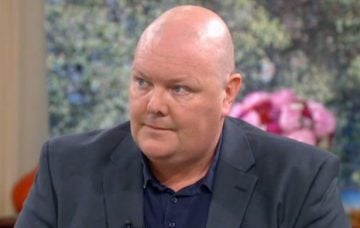 The fan fave has been keeping a secret all this time...

Emmerdale favourite Dominic Brunt has revealed he’s been hiding a surprising secret throughout his time on the ITV soap.

The 48-year-old actor, who has played Paddy Kirk since 1997, has been battling anxiety on set before filming every scene.

Read more: Emmerdale: Sarah to die while Debbie is in jail?

In a recent interview, he admitted that he panics before filming because it’s “petrifying”.

He surprised fans when he told the Daily Star: “I love it and adore it. I am loyal to the show and it still frightens the life out of me.

“I still shake before every scene because it’s petrifying.”

He continued: “You put eight million people on a hillside watching each episode, that’s quite sobering.”

Dominic’s character Paddy is currently at the centre of a heartbreaking storyline, alongside on-screen partner Chas Dingle (played by Lucy Pargeter).

The funeral saw the return of Cain Dingle, who fled the village recently in the aftermath of Joe Tate’s death (who he believes he killed).

Emmerdale viewers have watched in bits as Chas and Paddy were told their unborn baby would not survive long after childbirth due to the rare condition bilateral renal agenesis.

Scenes earlier this month saw Chas give birth, and then say goodbye to newborn daughter Grace.

Now the pair must come to terms with the horror of their loss.

In heartbreaking scenes to air over the coming months, they both struggle to cope and tragically even end up pushing each other away.

Could it be the breaking point for their relationship?

Do you think Paddy and Chas’ relationship will survive the ordeal? Leave us a comment on our Facebook page @EntertainmentDailyFix and let us know what you think!