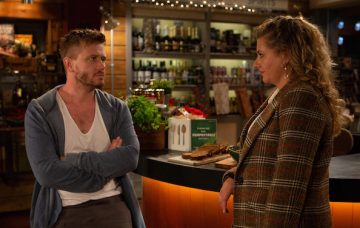 Emmerdale’s David to discover disgusting truth about Maya after she ends affair?

Will David report Maya to the police?

Maya Stepney could be in deep doo-doo if the truth about her relationship with Jacob Gallagher ever comes out.

Viewers have been disgusted and concerned as the teacher has crossed the line time and time again with her teenage pupil, who just happens to be her boyfriend’s son, too.

In scenes that aired last night (Wednesday 5 November), Maya appeared to do the right thing when she ended her relationship with David.

Dating David meant that she was often in the house alone with Jacob, which allowed their inappropriate relationship to fester.

After Maya and Jacob kissed again earlier this week, Maya tried to silence Jacob and blackmailed him into keeping quiet.

Realising it could ruin her career and actually have her arrested for grooming and child abuse, Maya took the decision to break up with David and remove herself from the dangerous love triangle.

She explained the reason had to do with Jacob, but not the truth of the grisly matter.

David asked: “What has me and you splitting up got to do with Jacob?”

She explained: “Jacob didn’t want me to say anything. But he’s struggling with his grades. He’s failing at his essays, he shouldn’t be failing at anything, he’s a bright kid.”

“You really moved out because of him?” David asked.

Maya lied: “I thought maybe he was angry with me, acting out because he didn’t want me living with you.”

Pull the other one, Maya!

David clearly struggled to believe that this was the reason for the split, and insisted she tell him the truth.

Will the stubborn shop owner start an investigation of his own in a bid to uncover the shocking REAL reason for Maya’s u-turn?

If David discovers Maya is lying about Jacob’s grades, will he suss what has really been happening under his nose?

And, if so, will be report his ex-girlfriend to the police?

Do you think Maya’s actions warrant a police investigation? Leave us a comment on our Facebook page @EntertainmentDailyFix and let us know what you think!