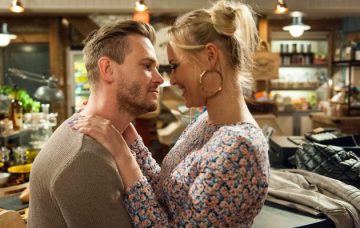 Emmerdale’s David and Tracy to reunite?

It looks like David and Tracy’s relationship is well and truly dead in the water… too much drama has passed under that bridge.

But actress Amy Walsh, who plays her, is just as hopeful as fans shipping for the former couple that they will reunite.

Speaking to Metro.co.uk, she admitted: “I really miss working with Matthew [Wolfenden].

“I also miss David and Tracy’s relationship because I think they had loads to offer but they had to mix it up a bit.

“I did feel like I was getting a little bit stuck in the shop – now I venture out in the village with different actors on different sets so that’s fun actually.

“But I do hope they get back together eventually.”

Things started to go badly wrong for the soap favourites when Tracy found out that David had a one-night stand with her so-called friend Leyla.

They split but then shared a night of passion, resulting in Tracy getting pregnant, but she decided to have an abortion.

Tracy’s still struggling to come to terms with the betrayal, and this week got drunk with Ross and smashed up cars while sharing her obvious rage at those who have wronged her of late!