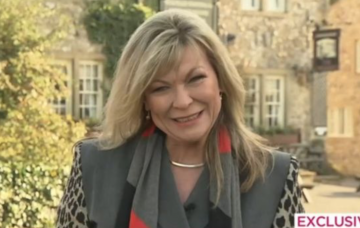 Is there someone to fill the Joe Tate-shaped hole in Home Farm?

Emmerdale’s Claire King has revealed there could be a replacement for Joe Tate on the cards already – just a matter of days after the character met his untimely demise.

The actress told radiotimes.com that her full-time return to the soap next year could see Kim Tate’s estranged son James making a dramatic entrance to the show and that he could be the next Joe Tate.

Claire explained what she thought her on-screen son would look like: “He’s bound to be young, glamorous and gorgeous isn’t he?

“They’re probably going to bring that kind of character in to replace Ned Porteous I imagine – he’s bound to be a good-looking boy.”

The last time we saw James on screen he was just a baby – leaving Emmerdale with Kim as part of her dramatic helicopter exit back in 1999.

James would now be a 22-year-old, but only time will tell what sort of man he has grown into.

With Kim as his mum and Frank Tate as his father, it’s no doubt James would be a Tate through-and-through. But would he be a fitting replacement for his late half-uncle?

Ned Porteous bowed out of the soap last week after receiving a punch from Cain Dingle before falling and hitting his head on a rock.

But while Cain thinks he is the one with blood on his hands, fans will know that he didn’t fully finish the job.

Graham was left with the grisly deed, thanks to orders from boss and lover Kim.

While fans have been speculating that Joe isn’t really dead, whether his shock exit from the soap is permanent remains to be seen. But for now there is a definitely a Joe-shaped hole in Emmerdale.

Could James be the one to fill it?

Would you like to see James Tate arrive in Emmerdale? Leave us a comment on our Facebook page @EntertainmentDailyFix and let us know what you think!