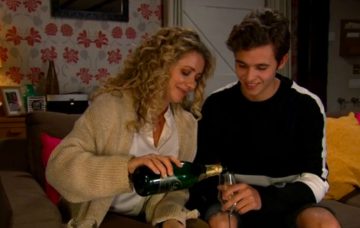 The actor plays Eric Pollard in the ITV soap

The actor, 70, plays Eric Pollard in the ITV soap whose underage grandson is being groomed and abused by his teacher Maya Stepney.

But while the soap is keen to raise awareness of the harm done to boys who are abused in this way, the actor doesn’t agree.

Instead he shared a story written about the storyline and added comments calling the abuse “a young man’s dream”.

The comment was even liked by his Emmerdale co-star Bhasker Patel, 62, who plays businessman Rishi Sharma.

Viewers have watched horrified over recent weeks as Jacob, 15, has been groomed and manipulated by Maya who is dating his father David Metcalfe.

And soap bosses have been keen to stress the importance of the storyline in showing the effects on young Jacob.

They have worked extensively with charity Barnardo’s in order to portray the storyline as sensitively and accurately as possible.

Producer Laura Shaw said in a statement: “It was important for us to tell this storyline authentically, so we approached Barnardo’s for advice on scripts and character behaviour.

“Our researchers, story team and actors met with Barnardo’s experts and young men who have been supported by the charity.

“We met some incredible individuals and were moved by their courage and willingness to help us tell this story sensitively.

“Hopefully it will make young people and their parents more aware of these issues and their impact.”

Likewise Barnardo’s boss Javed Khan said he hoped the storyline will break down stereotypes about boys being abused by women.

He added: “We were really pleased to be approached by Emmerdale to advise on the serious subject of adult women grooming and abusing boys.

“Too often this is seen as ‘taboo’ and not talked about.

“Our specialist UK-wide services support thousands of children who have been sexually exploited by both men and women, to rebuild their lives; and we work with children at risk to help them stay safe.

“We know from research that outdated views still exist about boys who are groomed by adult women, but in reality it causes lasting harm, and problems with trust, affection, love and sex.”

ITV declined to comment when approached by the Daily Mirror and Mail.

What do you think of Chris’ comments? Leave us a comment on our Facebook page @EntertainmentDailyFix and let us know what you think!