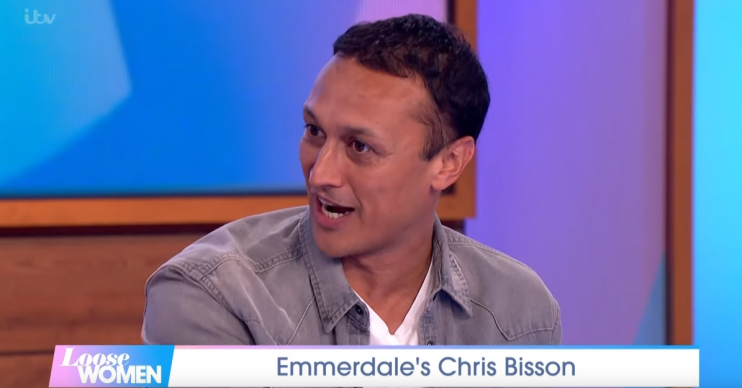 His death is destroying lives in the village

Chris Bisson gave away a teaser on Loose Women of what’s to come in Emmerdale.

Last week character Frank Clayton left the burning sweet factory but as he got out, an explosion happened, throwing Frank against the van.

Jai and his family were in financial trouble before the fire and they are now relying on the insurance money to keep them afloat and pay off their loan to Kim Tate.

However, villagers don’t know that Kerry Wyatt and her daughter Amy sabotaged the CCTV footage in the factory after Kerry broke in and stole charity money from the safe so her daughter could pay off a debt.

Speaking on Loose Women, Chris revealed that there is more to come and gave a teaser of what viewers can expect.

Chris said: “Jai’s right in the middle of it, it’s his factory, his dad has made a mess of it and he’s trying now to pick up the pieces.

Read More: Emmerdale’s Kris Mochrie shares highlights as he holidays with his boyfriend

Chris then placed his hand over his mouth and said: “Oh I don’t know if we’ve got to that bit yet.”

Read More: Comedian Tommy Cannon reveals  he is joining the case of Emmerdale

Loose Women then played a preview clip where Kim goes up to Jai and his dad Rishi, asking about their first payment.

Chris then pointed at the preview clip and said: “That’s signalling that Kim Tate will be a big part of the future, so she and Jai will be having battles.”

Have you been watching Emmerdale? Leave us a comment on our Facebook page @EntertainmentDailyFix and let us know what you think.