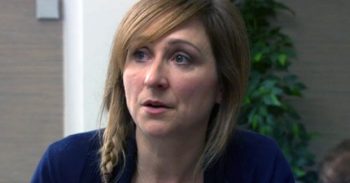 Sandy’s shock death in Emmerdale is going to rock Laurel Thomas to the core.

Next week on the soap, Laurel will receive the news that her father-in-law Sandy has passed away in Australia.

It comes after the actor who played Sandy for 13 years, Freddie Jones, passed away in real life.

Laurel actress Charlotte Bellamy told Inside Soap: “When a cast member dies in real life, there has to be a period where the character is not really mentioned.

“But now feels the most correct and respectful time to acknowledge the actor and his character have died, and I feel the show has dealt with it really well.”

The news of Sandy’s death came tonight and it will leave Laurel and her children devastated.

Further, it will lead to Arthur making a huge confession about abusing Archie.

The news that late husband Ashley’s father has passed away leaves Laurel heartbroken, and she dreads having to tell her kids.

As she prepares herself to break the sad news later this week, Laurel isn’t surprised when Arthur takes the news particularly badly and she is upset when he races out as she tells him his grandad has died.

At the graveyard, Jimmy King finds Arthur crying at Ashley’s grave, and the school boy is clearly struggling in the wake of Sandy’s death.

But as Jimmy questions Arthur about what has got him so upset, Arthur keeps his cards close to his chest and just admits that he thinks God is punishing him for something he has done.

However, as Arthur’s cryptic comment leaves Jimmy confused, Laurel is surprised when her son comes home sobbing and reveals he has got something to tell her.

Laurel is stunned into silence as Arthur admits that he is the one who has been hurting Archie and letting Jimmy take the blame.

Shell-shocked, Laurel tries to process the news… but will she admit to everyone else that her son was responsible for such awful behaviour?

Do you think Laurel should come clean? Leave us a comment on our Facebook page @EntertainmentDailyFix and let us know what you think!