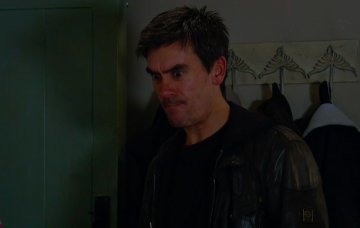 With the fact that he ‘killed’ Joe Tate weighing heavily on his mind, it looks like Cain Dingle could be heading on a downward spiral.

After tonight’s (Tuesday 16 October) visit to the Dales, Cain is definitely not coping with the fact he is responsible for Joe’s untimely demise.

If only he knew that he wasn’t actually the one who killed his daughter’s fiancé and that it was in fact Graham Foster who did the grisly deed.

But as far as Cain is concerned he has got blood on his hands, and the secret is killing him.

Tonight fans saw Cain hitting the bottle as he struggled with what happened on the day of the masquerade ball at Home Farm.

But as Moira questioned what’s been going on inside his head for the last few days, drunk Cain saw red and overturned the kitchen table in front of her.

So clearly he’s not up for sharing… but if he won’t let love-of-his-life Moira in, then who will he talk to?

Next week sees Moira questioning Cain once again, desperate to get some answers.

As she asks him where he was on the day of the ball and what is going on with Graham, it’s clear she’s onto something. But is she about to unearth Cain’s killer secret?

As Cain bottles up what happened the day Joe met his maker, the only person he can talk to is Graham, and that’s never a good place to be in.

With Mr Foster issuing threats left, right and centre to Cain, the tables have really turned on the Dingle mechanic who is used to being the one to call the shots.

As the pressure mounts, will this secret be Cain’s undoing?

Let’s hope he talks to Moira before he does something he’ll really regret.

How long do you think Graham will let Cain think he killed Joe? Leave us a comment on our Facebook page @EntertainmentDailyFix and let us know what you think!