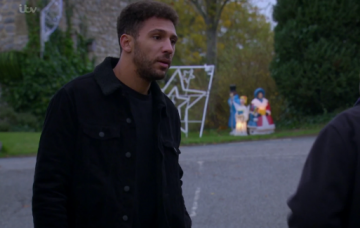 But who beat him up?

There was an immediate whiff of danger in the air as Jessie’s jailbird son Billy turned up unannounced at her sort-of-wedding on Christmas Day.

Aaron recognised him as one of his bullying agitators from his time in prison and saw red.

Robert had to hold him back at the party, and his rage was still clear in last night’s episode.

He told Robert: “Billy kept himself in the background most of the time. He didn’t want to get in trouble, I suppose.

“He was still part of it – he had this way of staying under the radar and he’d never let up.

“He was clever with it though – he only had to look at you to make you hate yourself. And now he’s here.”

But fans of the soap were still shocked as the newcomer was brutally beaten up at the end of the episode.

Who was the attacker? The obvious money would be on Aaron, or perhaps Robert, being protective towards his husband.

But some viewers also think Billy’s own brother, Ellis, could be the culprit.

Elsewhere, Lydia, Sam Dingle and Samson returned home from the wedding together to see their cottage had been ransacked, although nothing appeared to have been stolen.

Clearly something wasn’t stacking up.

Some fans have a theory that Billy may have been banged up with Lachlan and is the puppet in some scheme the serial killer is cooking up from behind bars to torment the Dingles!

I think maybe Lachlan and Billy were in the same prison/cell together, and Lachlan asked Billy to break into the Dingles and get a picture of Belle for him, either in return for something or bcoz Billy owes Lachlan a favour. #Emmerdale

Yes! Can’t wait for King 👑 Lachlan to make his grand return, should be good! And it would make perfect sense for him to return too if he’s in cahoots with Billy, I like this theory Charlotte. #Emmerdale

Ok, 3 things: 1) I reckon the Dingle break-in has something to do with Lachlan. Could Billy have met him in prison? 2) Has Billy hurt himself? 3) …and there’s got to be a reason Aaron’s not talking to Robert. It’ll be tough to take if Aaron cheated on Robert. #Robron #Emmerdale

Well, it’s an interesting theory! Leave us a comment on our Facebook page @EntertainmentDailyFix and let us know what you think!