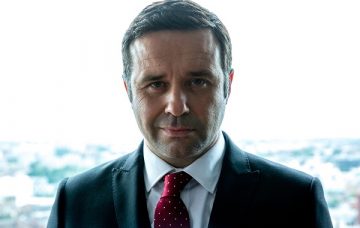 Ever since Joe Tate’s ambiguous death, Emmerdale fans have refused to believe he’s gone for good.

Despite actor Ned Porteous confirming he really has left, viewers are standing firm – Joe’s alive and he’ll be returning to the village one day in the future.

Read more: Emmerdale SPOILER: Jessie Grant haunted by her past

After all, we didn’t see his dead body, did we?

So, although Ned is currently seeking fame and fortune in Los Angeles, he’ll be back one day for the mother of all showdowns with Kim Tate.

In a recent interview with Digital Spy, Andrew let slip that his character couldn’t possibly have killed Joe, because of their close relationship.

Talking about the possibility of Joe’s return, Andrew said: “I feel that would be wonderful, because Graham viewed Joe like a son and I don’t think Graham would kill his own son.”

The actor also revealed that Emmerdale fans have turned against him ever since he ‘murdered’ his own protégé, adding: “[The fans] don’t trust me.

“They never trusted me anyway, but yes they are a lot more wary about what he says and what he does.”

Viewers have seen Graham spiralling out of control ever since the departure of Joe.

He’s been in a pit of despair after ‘finishing off’ his closest friend – but did he really?

Fearing for his life (quite rightly), Joe left the village and his fiancée Debbie Dingle waiting at the alter on what was supposed to be their wedding day.

But, after a change of heart, he returned to declare his love for Debbie and face down Kim.

However, he never got to speak to Debbie as her furious dad Cain got to him first…

He punched Joe, leaving his lifeless body rumpled on the ground.

Fans were then led to believe that Graham finished Joe off.

Speaking about Graham’s mindset, Andrew added: “Graham is on the brink of exploding and wants to tell Debbie everything, but he doesn’t.

“He’s drinking and finding it increasingly difficult to keep a lid on it, but knows he must.

“What he does say is that Debbie’s dad Cain knows more than she realises. It’s Graham’s way of deflecting and transferring – he wants someone else to feel what he’s feeling.”

Do you think Joe Tate is alive? Leave us a comment on our Facebook page @EntertainmentDailyFix and let us know what you think!