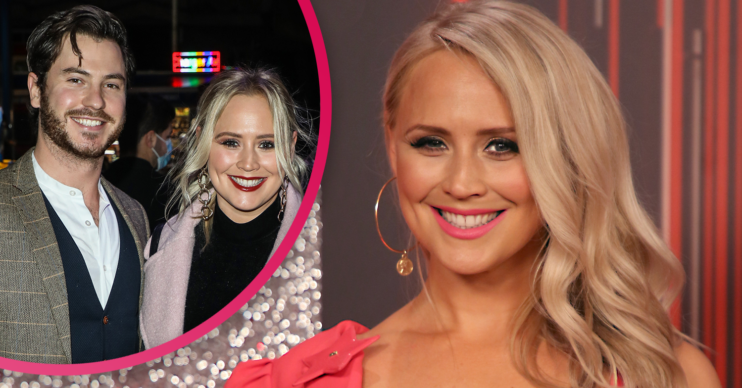 Emmerdale’s Amy Walsh and her partner Toby-Alexander Smith are expecting their first baby together.

The couple announced the happy news today (September 6), with Amy showing off her cute baby bump.

Amy and Toby have revealed they’ll be getting an extra special gift this Christmas – their first little baby!

The couple shared their happy news with OK!, with Amy admitting they’re “so excited” to become parents.

Read more: Who is Gray Atkins and how many times has he killed?

Amy, 34, was diagnosed with polycystic ovaries at 20, so thought her fertility might be an issue.

However, the couple didn’t end up trying for very long before they got their happy news.

“It feels as though the way everything happened was meant to be. I thought I might struggle with fertility, so for pregnancy to happen quite easily and when I wanted – I was gobsmacked. We feel incredibly lucky,” Amy said.

How did Amy and Toby meet?

Toby wasn’t even meant to be in the audience that year and Amy wouldn’t have been there if it wasn’t for Jamie Laing’s injury and Kelvin Fletcher taking his place.

Four months after their first meeting, with lockdown in full swing and work on soaps stopped, Toby moved in with Amy.

Amy admitted the “twists of fate that came into play to make us meet are crazy”, while she also admitted that the pair didn’t know they were both on soaps when they first met.

She said: “After the show someone sent me a screenshot of us in the audience and I sent it to my best friend and joked: ‘Me and my future husband,’ just thinking it was going to be a date. But after our first date I was like: ‘This is it!'”

Toby admitted the three months of no filming, when they couple were in their own little bubble, was the “best three months” of his life.

How did Amy’s famous sister react?

Amy said she took a picture of the pregnancy test and sent it to sisters Kimberley and Sally and the girls’ mum – and they rang her immediately.

She said: “They were like: ‘Oh my God, you can’t tell us something like that over a text message!’ They’re so happy and excited for us. Sally has just had another baby and Kimberley had her third in May, so it’s lovely the three of us will all have had a baby in the same year.”

Head to our Facebook page @EntertainmentDailyFix and send Amy and Toby your congratulations.