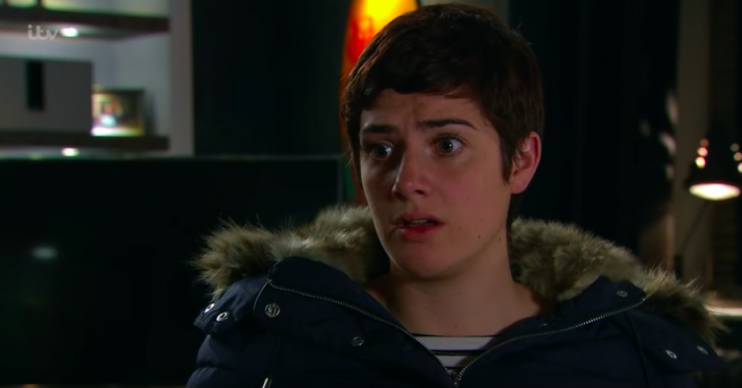 Did she just put a hit on her?

Victoria Sugden shocked Emmerdale fans last night, when she appeared to put a ‘hit’ out on her rapist’s mum Wendy Posner.

The pregnant chef reached breaking point with Wendy’s unwelcome presence in the village and told her brother-in-law Aaron Dingle to do “whatever it takes to get rid of her”.

Read more: Emmerdale SPOILERS: Liv’s life in danger when she collapses alone and vulnerable in the woods

On Thursday (December 5), Vic was at her wit’s end when she stormed around to Aaron’s house and told him Wendy was “getting stronger”.

She said: “She’s only going to get more determined. Unless we do something about it.”

Aaron, already on a mission of self-destruct since husband Robert ended their marriage from jail, replied: “I’m glad you’ve finally come around. It’s not going to be pretty, though.”

Read more: Emmerdale SPOILERS: Graham and Rhona plan to start new life away from village before his brutal murder

He ensured her: “You won’t have any part to play in it either. Not in that state. You leave it to me.”

“Right, fine,” she replied. “But not like Robert because I can’t lose you too.”

Did… did Vic put a hit out on Wendy?

When Aaron asked if she telling him “to hold back”, she shocked viewers by saying: “No. But just don’t be Robert. You have to be clever about it. But whatever it takes, you get rid of her.”

As the credits rolled, viewers expressed their surprise at the latest twist, with one simply saying: “Did… did Vic put a hit out on Wendy?”

Others were furious with the character for asking Aaron to risk his own freedom by committing murder, with one angry fan writing: “Not super thrilled that Vic is laying this on Aaron’s door, considering her reaction after she was the one who brought Rob back into the situation and then was angry at what he did. But there’s some cosmic justice in the fact that Aaron will be making Wendy’s life hell #TeamAaron.”

Another said: “The last time she said something like that, Robert went to prison for 14 years and she didn’t even thank him #JustSaying.”

She says “whatever it takes” as if she’s exhausted every other option. She’s not even called the police on Wendy. She could start there. Aaron’s help should be a last resort.

Omg here we go again do whatever it takes, looked what happened to Robert when you asked him to help and you didn't even support him. This story is making no sense they will end up playing happy family's, I'm so fed up with Emmerdale at the moment only watching cause of aaron😞😞

A third added: “Here we go again. Do whatever it takes… Look what happened to Robert when you asked him to help and you didn’t even support him.

“This story is making no sense. They will end up playing happy families. I’m so fed up with Emmerdale at the moment, only watching because of Aaron.”

“Victoria is giving me whiplash with how much her personality is changing from scene to scene, let alone episode,” seethed one more. “No doubt she will change her mind and Aaron will be the bad guy. This is a disgusting, offensive storyline. Vic’s behaviour has been so badly written and inconsistent.”

Another pointed out that “Victoria hasn’t even called the police yet” and that Aaron should have been “a last resort”.

Team Aaron all the way! Wendy & Luke should not be in the Village. Vic & Aaron don't deserve having to see them every day. Aaron is suffering without Robert and no one seems to care and having Wendy there is just making it worse. So Aaron do your worst but don't get caught!

Others, however, were behind Vic and Aaron every step of the way, desperate to see Wendy leave the village – even if it’s in a coffin.

One wrote: “Please Aaron get rid of Wendy, I can’t bear this story.”

Another said: “Team Aaron all the way! Wendy and Luke should not be in the village. Vic and Aaron don’t deserve having to see them every day.

“Aaron is suffering without Robert and no one seems to care and having Wendy there is just making it worse. So Aaron do your worst but don’t get caught!”

“What is this? Is Vic actually growing a brain? Hallelujah! Quick someone look out the window and see if pigs are flying,” remarked one more.

Future episodes see Aaron go missing as the aftermath of being without Robert take their toll, and he crumbles when Liv receives a letter from Robert in jail – but he doesn’t.

Do you want Aaron to kill Wendy? Leave us a comment on our Facebook page @EntertainmentDailyFix and let us know what you think!