Pierce has been keeping the toddler in a bedroom!

Viewers of Emmerdale were left disgusted as it was revealed that Pierce Harris had been drugging Vanessa’s son, Johnny.

For the past week, Pierce has been holding Vanessa and Johnny hostage in Laurel’s home, Mulberry Cottage.

While Vanessa has been tied to the kitchen cabinet, Pierce has been keeping Johnny in one of the bedrooms.

Pierce said: “Johnny have you been playing with the monitor? Oh no don’t worry, I’m not mad. Anyway, time to take your medicine, champ.

“I’ve got you some much better stuff this time. It’s gonna taste a whole lot nicer, I promise. Help you have a really nice, long nap.”

Vanessa was left terrified hearing what Pierce was doing to Johnny and viewers were disgusted by his actions.

So Pierce has been drugging Johnny ?? 🤔😱 #Emmerdale 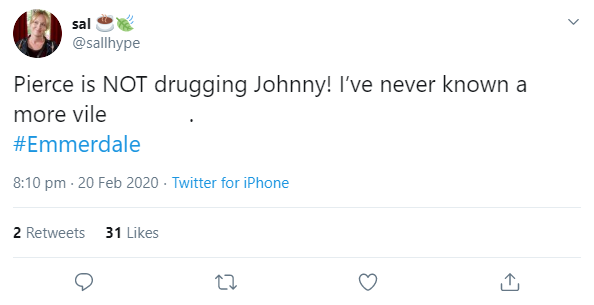 At the end of last night’s episode, when Rhona was looking at one of Leo’s art pieces, she realised he attached a card that was on her flowers.

When she opened it, she realised the flowers she had recently been sent were from her rapist ex-husband.

Viewers know Pierce kidnapped Vanessa and Johnny after Vanessa saw him walking through the village.

He’s been plotting to get back with his ex-wife Rhona Goskirk, who he raped on their wedding night in 2017.

After being released from prison, he was confronted by Rhona’s boyfriend Graham Foster and told to keep away from her.

But Pierce didn’t take too kindly to Graham’s warning and ended up killing him.

Read More: Emmerdale’s Charity accused of having no shame over latest scam

Graham’s death has been pinned on Marlon Dingle, who is the father of Rhona’s son Leo, and the chef is in prison awaiting trial.

But now Rhona knows Pierce is back, will she be able to save Vanessa and Johnny and help free Marlon?