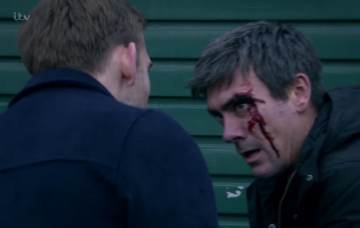 Last night he took a beating

Emmerdale viewers were ‘treated’ to a second upsetting attack in as many evenings, as Cain Dingle was beaten up by a gang of thugs last night.

He had gone to confront the lads who had set upon Matty at the New Year’s Eve party, leaving him mortified after brutally attempting to strip him.

But the usually unbeatable hardman was the one left fighting for survival after ring leader Isaac set his mates on him, too.

Fans were confused that Emmerdale’s resident hardman would allow this to happen.

And they fear that the guilt of ‘killing’ Joe Tate is resting so heavily on his shoulders he has become a shell of a man.

Catching up on #Emmerdale and I had to fast forward cuz I refuse to watch Cain get beaten up! He’s my fave! 😩😩😩😩

#emmerdale not a chance would Cain have taken that. Whoever decided to butcher his character should hang their head 😪

If Cain Dingle hadn’t had killed Joe Tate he would have had the lot of them, nasty that 😬 felt sorry for him 😢@HordleyJeff brilliant performance as always 👍🏆#Emmerdale #bringbackjoetate

This Cain stuff is BS. For years he’s portrayed as this hard man/killer who almost beat the hell out of Robert only to be told he’s never actually killed anyone & now he’s allowing himself to be beaten? Yea okay… #Emmerdale

Do you think they are taking Cain’s character in the wrong direction? Leave us a comment on our Facebook page @EntertainmentDailyFix and let us know what you think!