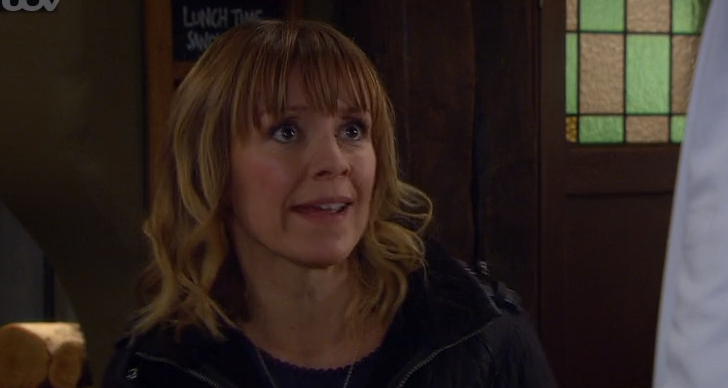 She wants revenge for Graham's murder

But while the police think Marlon Dingle is guilty of his murder, Rhona is convinced someone else in the village is hiding a grisly secret.

Emmerdale residents were left reeling when Marlon was taken in for questioning following his very public argument with Graham on the day he died.

But while Marlon fights to prove that he isn’t the one who killed Graham, Rhona is on her own personal mission to find out who really does have blood on their hands following Graham’s grisly demise.

Suspecting that Kim is responsible for Graham’s death, Rhona does her best detective work and sneaks into Home Farm to try and look for evidence that she can take to the police.

But while Rhona is right that Kim wanted Graham dead, Emmerdale fans know that she is barking up the wrong tree entirely and it is actually her evil ex husband Pierce Harris who killed Graham on the night he was supposed to be fleeing the village with Rhona.

However, as an adamant Rhona searches for anything incriminating she can find on Kim, she is caught in the act by Al Chapman and Rhona accuses him of being involved in Graham’s death.

But while Al is hiding the huge secret of his own that Graham was already dead when he went to bump him off, he doesn’t hesitate to tell Kim that he caught Rhona searching Home Farm and she is soon determined to handle the problem herself.

So it looks like Rhona might be in trouble with Kim, but sadly she’s not the only one who has got their sights set on the village vet.

Pierce is also back on our screens and as he reassures his flat mate that he will have a new job soon, it is clear he is plotting something sinister.

As he lurks in the village, Pierce doesn’t waste any time heading to Home Farm… but is he looking for Kim? Or is Rhona the one who he is making a beeline for, leaving her in grave danger?

Why do you think Pierce is at Home Farm? Leave us a comment on our Facebook page @EntertainmentDailyFix and let us know what you think!