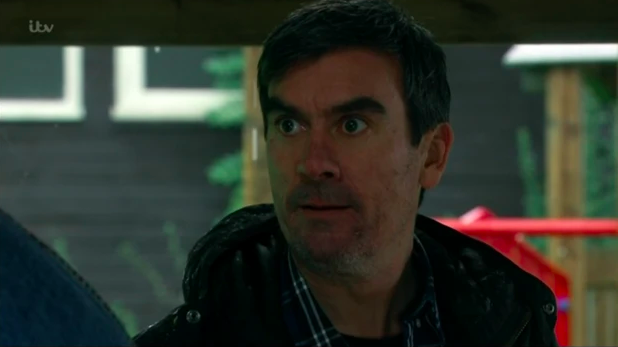 Cain is left shaken after a death occurs on the farm

Cain is left shaken when a murder is committed at Butler’s farm in next week’s Emmerdale.

Since accidentally shooting son Nate with Will’s gun, Cain has been trying his best to hide what he did.

However, now it looks like there will be repercussions when there’s a brutal attack on Butler’s farm resulting in a death, and Cain is on edge.

It all starts when dodgy DI Malone sets up a trap to get Will into doing another drugs job.

Soon Will’s anxiety and desperation are increasing due to the stress of everything.

Cain becomes suspicious when he uncovers a package hidden in Malone’s car and tells Will that he thinks it’s time they have a ‘little chat’.

Unable to hide it any longer, Will comes clean to Cain. He tells him everything about Malone and what he’s been up to.

Cain decides to confront Malone over it and goes to meet him in a layby wanting to get some answers.

However the mechanic soon realises it’s a mistake when he gets back he finds the garage has been trashed.

But worse is to come when Cain discovers that Moira’s bull has been murdered. How will Moira react when she finds out one of her animals has been killed and it’s all thanks to Cain?

Cain’s left shaken, but is this just the start of Malone’s warnings?

Read More: Samantha Giles felt ‘frustrated’ and like she ‘needed to move on’ from Emmerdale

This week, viewers will be introduced to DI Malone but it will soon be revealed he’s no good cop.

Will starts to feel the pressure when the police come to question him about the gun that was used to shoot Nate.

But it soon becomes clear that Will knows Malone and they share history.

How do they know each other?