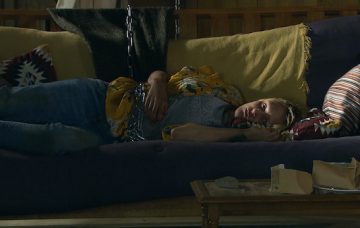 The village kids stumble upon the shed where Rebecca is being held, but is it too late?

After narrowly avoiding death at the hands of her twisted nephew Lachlan White, it looks like it’s curtains for Rebecca after all.

As the week kicks off, Bex is in a bad way and desperately hammers her at her chains with a rock.

But her situation becomes a hell of a lot worse when she knocks over her water bottle and realising she’s now fighting a losing battle she gives up.

But a noise outside of the shack makes her struggle against her bonds again and try to look out of the window.

Whatever was there is gone though and a broken Rebecca collapses on the floor, weeping tears of anguish as she realises she’s going to die there after all.

Meanwhile Bob and Laurel join Nicola and Jimmy when they go camping with the kids in the woods.

While they’re there, Bob tries to scare the youngsters with ghost stories to no avail.

But Misty, who’s also there, takes over and intrigues the kids with tales of the afterlife.

After the stories, the kids head off into the woods to look for firewood but Angelica, Carl, April, Heath, Cathy and Arthur are stopped in their tracks when they hear strange noises and decide to investigate.

They race back to the adults and tell them about the noises, but the grown-ups are dismissive.

The troubled youngsters know what they heard though and decide to find out what is going on in the woods.

They plot to go and investigate again but are disappointed when they’re plans are thwarted.

Not to be put off though, back in the village they lie to Laurel that they’re off to help Harriet in the church and sneak off into the woods to find their ‘ghost’.

In the woods they approach the shack and Angelica goes to open the door.

Meanwhile Lachlan is back from his holiday and hears the kids are searching the woods.

He races there too, determined to find Rebecca in the shack before the kids get to her.

Will Rebecca survive? Leave us a comment on our Facebook page @EntertainmentDailyFix and let us know what you think!