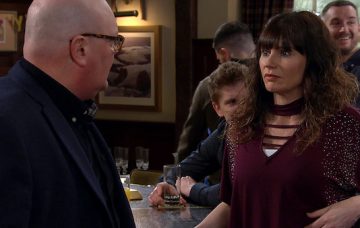 It’s Chas and Paddy’s 20-week scan in Emmerdale next week and both proud parents-to-be are looking forward to seeing their baby on the ultrasound screen.

But Chas panics when she realises she’s got the days wrong and the scan is actually that day, not the following as she thought.

She heads out trying to find Paddy to let him know they need to get to the hospital but, when she can’t find him, she’s worried that he’ll miss the scan.

Later, at the hospital, Chas is overcome with joy to be told she’s expecting a baby girl but her joy soon turns to dread as the sonographer spots something concerning on the monitor.

Are fan-favourite couple Chas and Paddy about to face even more heartache?

Chas found out she was unexpectedly pregnant earlier this year when a routine GP appointment reminded her that she hadn’t been in for her contraceptive injection.

Filled with horror, she took a pregnancy test back at the Woolpack and was distraught to find out she was indeed preggers.

She’s had mixed feelings about becoming a mum again, leaving viewers heartbroken earlier this year when she confessed to Paddy that she blamed herself for son Aaron being raped and abused by his dad Gordon Livesy when she left them.

She even considered an abortion at one point, convinced that she would be a terrible mum and was in no way responsible enough to bring a new life into the world.

But when she saw how much Paddy wanted their baby, and when she properly considered life with a new child, the pub landlady decided it was what she wanted.

She’s already been diagnosed with Hyperemesis Gravidarum – that’s severe morning sickness to us – could they really be about to face another blow?

What do you think the sonographer finds? Leave us a comment on our Facebook page @EntertainmentDailyFix and let us know what you think!