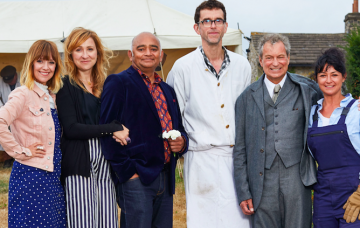 It's a special treat for soap fans!

Some of Emmerdale’s best loved cast – old and new – have taken part in a special spin-off series, which starts tonight.

The series marks 100 years since the end of the First World War, and uncovers the incredible untold stories of real Yorkshire men and women.

Viewers will learn about some local unsung heroes of the war, from the unique perspective of the cast who have volunteered to step back into the past.

In tonight’s first episode (Thursday 20 September), Mark Charnock, who plays chef Marlon Dingle, looks back on the story of a real First World War chef who lived in the original village Emmerdale was based on.

Read more: Emmerdale airs Lachlan’s final scenes – but could he come back?

Mark, who admits he actually has very little real life experience of cooking, suddenly finds himself behind the lines and preparing meals for hungry troops…

Perhaps he should have auditioned for MasterChef, too?

In future episodes, Charlotte Bellamy – better known for playing Laurel Thomas – heads to Esholt to uncover a story of love and loss that played out at the real Woolpack pub during the Great War.

Charlotte pieces together the heartbreaking story of the landlord’s son, Joshua Booth, who left behind his sweetheart Winnie when he volunteered to fight.

Meanwhile, Zoe Henry, aka Emmerdale vet Rhona Goskirk, will uncover the astonishing story of a local Yorkshire vet whose life was transformed by the Great War.

Will you be watching this special spin-off Emmerdale series? Leave us a comment on our Facebook page @EntertainmentDailyFix and let us know what you think!