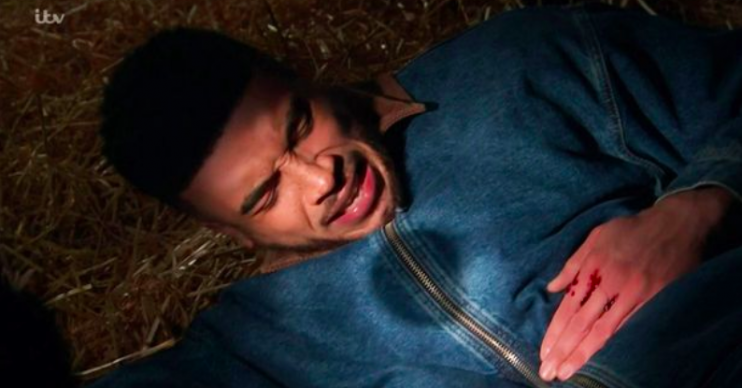 It was a tragic accident

Nate Robinson has been shot in a tragic accident, but some Emmerdale viewers DON’T want him to survive!

Proving that they still hold a grudge against Nate for having an affair with Moira Dingle and causing the breakdown of her marriage to Cain, soap fans have declared they want him to DIE.

On Thursday night (February 20), Cain was seen rushing to save estranged wife Moira from a mystery intruder – who he ended up shooting.

But in shocking scenes, the man turned out to be Cain’s son Nate.

Worried that rustlers were back to kill their sheep, Cain and Moira rushed to the barn after hearing a suspicious noise.

Read more: Emmerdale’s Charity accused of having no shame over latest scam

Last week, a gang of rustlers had attacked a farmhand and slaughtered sheep.

Believing Moira to be in serious danger, Cain armed himself with a gun – the one Harriet gave him to get rid of – and took aim at a shadowy figure in the barn.

Why oh why can’t you just let Nate die? The character is awful.

Pulling out the gun, Cain was seen opening fire at the man, who fell to the floor of the building with blood pouring from his stomach.

Cain and Moira were stunned to see Nate clutching his wound as he lay on the ground in agony.

Although Nate was rushed to hospital, as Cain and Moira thought up an excuse to avoid jail, some of those watching from home hoped the relative newcomer would die from his wound.

Writing on Twitter, one hoped: “Fatal? Sorry but Nate is a pointless wooden character.”

Another said: “Please let this be Nate’s exit.”

Shame it wasn’t a headshot. 🤷‍♀️

Wish was too but it won't

Fatal? 🙏
Sorry but Nate is a pointless wooden character 🤷🏻‍♀️

Please let this be his exit

Why oh why can't you just let him die? The actor can't act. The character is awful. You are literally flogging a dead horse here.

A third said: “Why oh why can’t you just let Nate die? The actor can’t act. The character is awful. You are literally flogging a dead horse here.”

“Shame it wasn’t a head shot,” said another bloodthirsty viewer, while another added: “I hope he’s NOT going to be okay.”

One more wrote: “Cain should just bury him in a field and be done with it.”

Other were slightly less Machiavellian about the plot, hoping the accidental shooting might actually bring Nate and Cain closer together after their turbulent past.

Viewers know that Nate arrived in the village intent on getting revenge on Cain.

At the time, we didn’t know why, but he was later revealed to be Cain’s long lost son with ex-Cara Robinson.

In an icky twist, Nate embarked on a passionate affair with his dad’s wife Moira, believing he’d been abandoned by him as a child.

However, Cain didn’t even know he had a secret son.

Despite the truth coming out, and Cain telling his son he wanted nothing to do with him, Nate stuck around in the village hoping to eventually have a relationship with his dad.